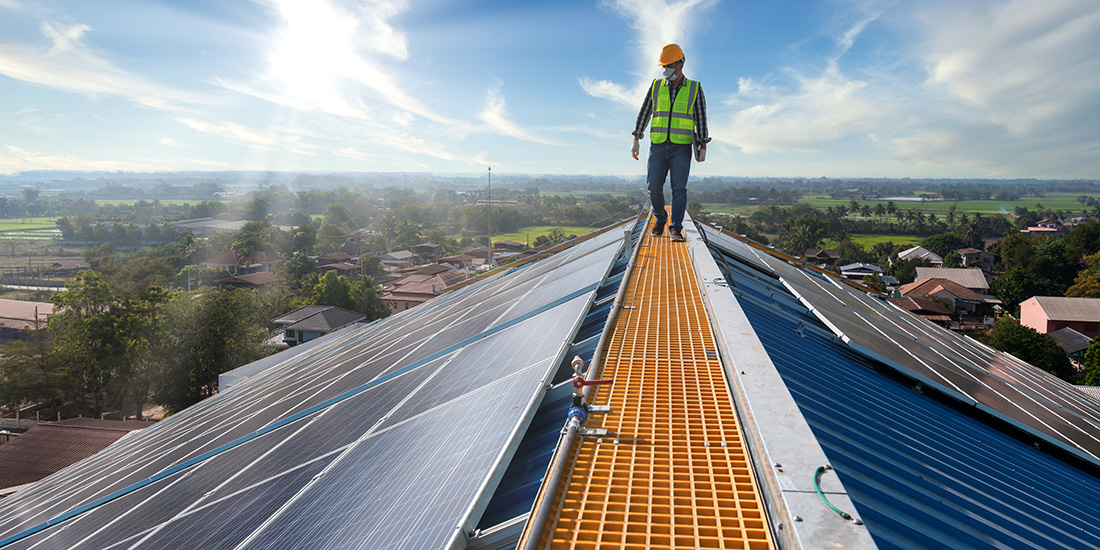 With 1.6 billion city-dwellers now facing regular exposure to extreme heat and more than 800 million people vulnerable to rising sea levels and flooding, the 26th Conference of the Parties, or COP26, brought together world leaders to attempt to solve the world’s most urgent problems.

The conference resulted in the Glasgow Climate Pact, negotiated through the consensus of almost 200 parties aiming to reach net-zero emissions by 2050.

As well as making it clear that net-zero commitments are now the norm, COP26 also saw countries and companies around the globe make bold commitments to curb methane emissions, reverse deforestation, phase out coal, and more, resulting in several new breakthroughs.

As the negotiations concluded with public-, private-, and cross-sector pledges, one thing became evident in every chat we had with executives and experts: sustainability is reshaping the architecture, engineering, construction, and manufacturing businesses for good.

Here are some insights we learned from leaders at the Sustainable Innovation Forum, as well as the rest of the COP26 conference to plan your organization’s next move.

The Challenges on the Road to Sustainability

1. The built environment generates nearly 40% of our greenhouse gas emissions: a worrying fact, but one that can be turned into an opportunity, according to AECOM Europe Director of Digital Consulting, Strategy, and Innovation David Philp. “Either we’re the brake, or we’re the accelerator in building resilience,” he explained.
2. By 2050, 30% of global carbon emissions will come from just making (not operating) our buildings and infrastructure. “In other words, embodied carbon is a huge part of the issue,” said David Benjamin, Director of AEC Industry Futures at Autodesk.
3. Unless the industry acts, the emissions problem in construction is only going to get worse: the world’s building stock will double by 2060. “That means [we’ll be] building everything that we’ve already built, all over the world over the course of time, again in the next 40 years,” said Victoria Burrows, Director of Advancing Net Zero, World Green Building Council. “That’s a huge amount of materials, processes that go into constructing those buildings…but that also means we need to address our existing buildings many of which will still be standing by 2050.”
4. Colliers research estimated that 7 trillion is going to be required to retrofit assets from now to 2050 across Europe. “In the UK that alone is 600 billion,” said Andres Guzman, Head of Sustainability at Colliers.
5. The world will need four times as much low-carbon electricity for the future, according to Simone Rossi, CEO of EDF Energy. “Today about half of our electricity comes from low carbon. In the future we’ll need more of it – all of it will have to be low carbon,” he explained. “That is a massive undertaking.”
6. Despite these challenges, making a change is no longer negotiable. “It’s a business imperative,” revealed the World Green Building Council's Victoria Burrows. “It’s now a risk to your organization if you are operating assets that are not future-proof.”
7. It’s not about waiting to make a change; it’s about work together. “We can make these changes now,” said Jose La Loggia, President of the Commercial HVAC Business at Trane Technologies. “We just have to go out there and do it. And if it takes a day or if it takes legislation, if it takes standards, if it takes technology … all these things can come together and we have to come together to make it happen.”
8. “We have a lot of technology already in engineering and construction that can be used to solve a lot of the problems that we’ve got today,” agreed Mike Haigh, CEO of Mott MacDonald. “I do feel sometimes that we’re held back from using the skills and the technology that we’ve already got, especially in the area of decarbonization…it requires owners, operators, designers, and constructors to work very closely together. Unfortunately, in many of our traditional ways of delivering infrastructure, we create barriers between these people who actually care desperately about climate change.”

The Opportunities: It’s Possible to Make a Change Today

9. The costs involved in taking the first step toward sustainable business practices are lower than you’d think. “RMI recently did a study where they quantified the embodied carbon reduction opportunities within the building sector across three different building types, and also what that premium would be,” revealed Katie Ross, Microsoft’s Global Real Estate Facilities and Sustainability Lead. “They found that you can achieve a 19%–46% reduction in embodied carbon with less than 1 % cost premium.”
10. There’s huge potential for private and public sector stakeholders to form key partnerships that will help achieve sustainable outcomes. “The private sector is in support of public sector leadership to make these climate commitments, make them clear and help us line up to deliver on them,” said Joe Speicher, Head of Sustainability & Foundation at Autodesk. “Companies [need] clear signals from governments,” agreed Eliano Russo, Head of E-Industries at Enel X. “As this becomes a genuine priority for all governments, then we can act … and I think we as businesses play a crucial role in [trying to translate this political willingness into action].”
11. There are, however, hidden costs to sustainability that everyone should consider. “It’s really important to measure the true cost of being circular,” said Didier Tshidimba, Senior Partner, Roland Berger. “If you look at bottle recycling you would need to clean and melt plastic again to produce new bottles…if you don’t have the right product, the right solvent…it’s more expensive but also more harmful to the environment to try to recycle. The same applies for aluminum. We found some suppliers who are really into supplying recycled aluminum…but we need to scale that and we’re not there yet.”
12. Taking advantage of technology will help the industry with decarbonization. “We believe that digitalization, automation, sensors, data analytics ... we have to have all of these things together to eke out that next level of gains for decarbonizing the built environment,” said Scott Tew, Vice President of Sustainability at Trane Technologies.
13. Better data management is also key to achieving sustainability goals. Edward Kulperger, Senior Vice President, Europe, Geotab, said: “I think we’re just scratching the surface in terms of the value that the datasets coming from infrastructure, energy, and transportation can provide in a socioeconomic benefit to our communities today.”
14. Landlords, however, need to be put under pressure to provide more data. “Getting access to data is very challenging in a lease space,” said Microsoft’s Katie Ross. “That is something that we are really pushing the conversation with our landlords...being able to have the data around energy, water, and waste… once we have that data, we can measure it, manage it and ultimately help reduce it to meet our climate goals.”
15. Using tools like the Embodied Carbon in Construction Calculator (EC3) to measure embodied carbon in the making of the building is an actionable way to make better decisions. “When you’re thinking about the design, certainly when you’re planning the construction of something, measure the carbon,” said Mike Haigh, CEO of Mott MacDonald. “Really work out where the carbon hot spots are. Chances are if you do that you’ll come up with different ways of working which will save carbon – but you know what, it will save costs as well.”
16. Decarbonization and electrification need to be considered as part of the collective future. But don’t forget about resilience—or about circularity and how materials are used in the world. “It’s one thing talking about decarbonizing a material,” said Haigh. “But we should also talk about using that material in a more efficient way or using different materials.”
17. There’s no reason to stop at net-zero. “We are working on many projects where the building is actually a producer of energy … that’s a great trend that we see more innovative building owners and operators coming to us to ask for,” said Tomas Brannemo, Vice President and President, Building Solutions, Johnson Controls.

What Are Governments Doing? The Key AEC Initiatives Announced (So Far)

18. The Global Alliance for Buildings and Construction launched the Clean Heat Forum, an initiative that will see countries and companies develop new policies for decarbonizing heating systems, currently a major cause of operational CO2 emissions from the built environment.

20. C40 Cities launched the new Clean Construction Coalition, made up of cities and construction sector companies that have agreed to halve emissions from the global built environment sector by 2030.
21. #BuildingToCOP26—a group of business and government networks focused on sustainability in the built environment—announced that they are working together to halve built environment emissions by 2030. The group also united behind the goals including that by 2030, 100% of new buildings must be net-zero in operation and by 2050, all new and existing assets must be net-zero across the whole life cycle.
22. Nearly 200 countries reached a breakthrough on creating a globally regulated carbon market by closing a deal on Article 6 of the 2015 Paris Agreement. This will potentially unlock trillions of dollars to combat climate change and build renewable energy facilities. President Biden pledged to reduce carbon emissions from the US–which has emitted more CO2 than any other country to date–by 50-52% from 2005 levels in 2030.  The UK, EU 27, Japan, and South Korea also have similar pledges in place.
23. President Biden also introduced a new $2 trillion infrastructure plan to help meet the reduced carbon emissions target in the United States. To put things in perspective, in just the last few months, nearly 1 in 3 Americans have been hit by a severe weather disaster, and 2 in 3 Americans have suffered through dangerous heat waves. “Delayed action on climate also sets the USA back in the global race on manufacturing and innovation,” said the White House in their November 8 communiqué.
24. Ending fossil fuel subsidies has been mentioned in a climate deal for the first time ever. Nearly 40 countries pledged to shift away from coal by ending all investment in coal power generation both domestically and internationally.
25. More than 40 world leaders representing two thirds of the global economy have agreed to coordinate a global transition to green energy. This will include speeding up the production of green technologies, which will help them become more affordable. 100 leaders also agreed to reduce methane by 30% by 2030 in a bid to shave 0.1 to 0.2°C of global warming by 2050.
26. The EU has also pledged €100 million ($114 million) to help developing countries support climate adaptation initiatives, while the UK launched the new Urban Climate Action programme; a £27.5 million ($36.7 million) fund to support developing cities seeking to reduce their emissions and grow sustainably.