Are intelligent machines friendly sidekicks, soft-spoken killers, or something in between? Although a robot uprising may sound far-fetched to some, the threat of robots overtaking people’s jobs is all too real, particularly in the manufacturing industry, where advancements in AI, robotics, and industrial automation are changing—and often eliminating—jobs. Not all is a lost, though: Those same innovations are also creating new jobs that require skilled workers.

All this has led to a huge need for reskilling—the process of retraining workers for new and sometimes different roles. Read more about the challenges of reskilling and how some companies are stepping up. 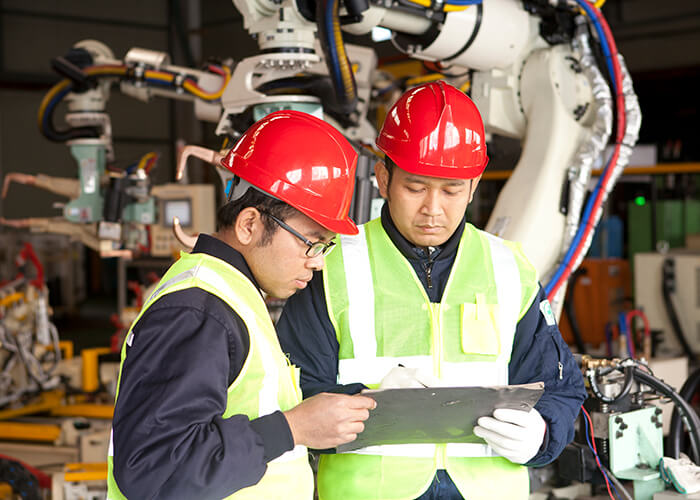 1. It’s Going to Cost a Lot, but Partnerships Will Get It Done

According to World Economic Forum, training 95% of at-risk workers in the United States for new jobs may cost more than $34 billion, and companies could reskill only about 25% of those workers profitably. But synergistic solutions—such as business partnerships, government investments, and public-private partnerships—can help lower costs and retrain more workers. No matter how companies foot the reskilling bill, they also have a chance to address significant gender gaps in the workforce. Women hold many of the positions that are ripe for replacement, and they’re also underrepresented in the fields most likely to see job growth, such as AI. Read the article.

2. A Think Tank and a Consulting Group Offer a Path Forward

How do businesses identify the best path for displaced employees? A job-transition guide created by the World Economic Forum and The Boston Consulting Group maps out the most viable transition opportunities for different types of workers, based on education, experience, and on-the-job training requirements. Whether a company is expecting to reduce its workforce or seeking skilled workers for newly created automation jobs, the guide offers a course of action. A company that needs workers to install, operate, and maintain automated equipment, for example, can use it to target the types of jobs that would require minimal retraining and offer a high potential for success. Again, partnerships can offer a boost: If that same company partners with a firm that needs to decrease its workforce, both can work jointly to transition workers. Read the article. 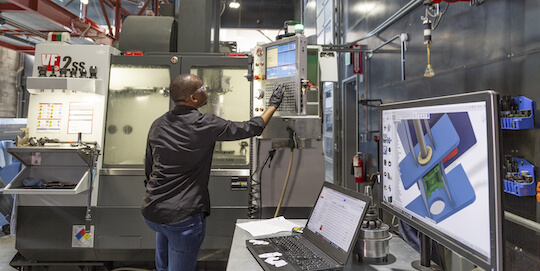 Learn more about software for the manufacturing industry.
Learn More

Learn more about software for the manufacturing industry.
Learn More

Stanley Black & Decker—based in New Britain, Connecticut (aka the Hardware City)—knows a thing or two about change. Founded in 1843, the maker of everyone’s favorite tape measure—along with hundreds of other tools, storage, and infrastructure products—has survived three industrial revolutions. Now, it’s helping to prepare its workforce for Industry 4.0 with a new facility for advanced manufacturing technologies and upskilling programs. The 23,000-square-foot Manufactory 4.0 will employ 50 industry experts to help promote the new technologies and train the company’s factory workers and other employees. Connecticut Governor Ned Lamont says the state has been tailoring school curricula to help make sure that companies like Stanley have a skilled talent pool of workers available to them. Read the article.

Advanced manufacturing workers at DENSO’s North American headquarters in Michigan will learn about high-speed video cameras, advanced robotics, Internet of Things technologies, and more at a new upskilling center in Battle Creek. The North Technical Training Center is specifically designed for engineering and skilled tradesworkers and machine technicians, offering them customized development plans to help them move into new roles created through automation. The nearly $2 million facility is the third of its kind for DENSO, which makes automobile components such as thermal, powertrain, and electronic systems. Other training centers are in Tennessee and Mexico. Read the article.

Some manufacturers are teaming up with local community colleges to offer workers free, customized skills training right at the plant, in trailers reconfigured as mobile training units. The refurbished trailers, which are slightly longer than a city bus, may look like typical 18-wheeler containers, but inside, they’re all business, outfitted with Wi-Fi and video technology, workstations, and a hands-on training lab. For employees who don’t have the time or means to enroll in extracurricular courses—or the ability to commute—mobile classrooms are a boon. Ohio’s Cuyahoga Community College is one learning center that’s invested in a mobile unit: Its trailer classroom, which is booked for all but five weeks this year, makes stops at nine companies in the state, including Ford Motor Company and Oatey, a manufacturer of products for the residential and commercial plumbing industries. Read the article.