Miami is known for its art-deco aesthetic: simple lines and sleek, white-on-white veneer. New Orleans is adorned with decorative ironwork, gabled roofs, and bright stucco frontages. New York stands out for its sleek skyscrapers, Chicago for its architectural terracotta, and San Francisco for its flamboyant Victorian homes.

And then there’s Silicon Valley: Although it’s one of the most significant places in America right now, it somehow feels like no place at all.

That feeling is especially evident in the valley’s largest city and de facto capital, San Jose, according to Scott Knies, executive director of the San Jose Downtown Association (SJDA), a nonprofit organization working to make downtown San Jose a better place to live, work, and play.

“Silicon Valley is often described as a mindset more than a place,” Knies says. “But as Silicon Valley grows up, we’re finding that ‘place’ matters a lot. That’s why you’re seeing a new emphasis on architecture in San Jose.”

It will take years or even decades for San Jose to feel as singular as other iconic US cities. But pervasive cranes and construction vests foretell a transformation. The past: architectural inconsequence. The future: a city with a signature style and original point of view.

Many distinctive downtowns are known for their soaring skylines. For most of its history, however, San Jose has grown out instead of up. One major reason is that its airport’s location, within four miles of the city center, has been the cause of long-held building height legislation in the name of aviation safety. But the airport alone didn’t stunt downtown’s growth. It had help from the entire regional economy, which embraced suburbanism as early as 1938, when Silicon Valley bore its first tech business—Hewlett Packard—in a garage in nearby Palo Alto.

“San Jose originally was an agricultural area with lots of orchards,” Knies says. “But after World War II, there was an annexation frenzy that kept expanding the city outward, leading to a complete abandonment of downtown.”

Gradually, Silicon Valley became a patchwork of subdivisions, shopping centers, and office parks. Then, in the 1970s, the state-funded San Jose Redevelopment Agency began luring investors downtown with tax-increment financing (TIF). Since then, its efforts have yielded the San Jose McEnery Convention Center, the SAP Center at San Jose, and the Tech Museum of Innovation.

The tide turned again in 2012, when former Gov. Jerry Brown dissolved that same redevelopment agency. “For decades, the San Jose Redevelopment Agency handled everything downtown; then, poof, it was gone,” says Knies, who adds that revitalization suddenly became the city’s responsibility instead of the state’s. “The city’s urban skills had atrophied, so it’s taken them a few years to build them back up. Which brings us to today, where instead of a redevelopment agency subsidizing certain projects, it’s all private sector–driven, while the public sector focuses on major transportation improvements.”

After a slow start, the new paradigm looks promising. The city is sponsoring a massive project expanding its historic downtown train depot, Diridon Station, which will become the largest transportation hub west of the Mississippi River—largely thanks to an expansion of the Bay Area Rapid Transit (BART) train system that will connect San Jose to San Francisco and the East Bay. In turn, Google plans to spend the next two decades building a giant campus around the station with up to eight million square feet of office, residential, and retail space, supporting as many as 20,000 employees.

“The era of building large civic buildings in San Jose has stopped, but all of a sudden tech companies are moving in,” says Katia McClain, managing principal for Northern California at California-based architecture firm Steinberg Hart. “There are now nearly 200 tech companies in downtown San Jose, and they’re shaping the city in a different way. Suddenly, it’s cool to be downtown again.”

Though it has offices in San Francisco, Los Angeles, San Diego, and Shanghai, Steinberg Hart’s roots are planted firmly in San Jose, where founder Goodwin Steinberg established his shop in 1953. Sixty-six years later, the firm—whose local projects, including collaborations with other global architects, include San Jose City Hall, the Tech Museum of Innovation, the convention center, and the airport—continues to coauthor San Jose’s design story.

While it’s not yet clear how that story will end, a trajectory is emerging in the contours of the firm’s current downtown mixed-use projects, which total more than 5.5 million square feet. MIRO, a pair of 28-story high-rise mixed-use apartment towers, will be San Jose’s tallest buildings when completed in 2020. Located across from city hall, MIRO will include 630 apartments; 21,000 square feet of retail; and more than 47,000 square feet of amenities. Other mixed-use projects in the works include the eight-story, 201-unit Modera San Pedro Square and Invicta, a mixed-use development offering 667 residential units across three towers that will also include retail, dining, an arts-exhibition space, and a live-performance theater. 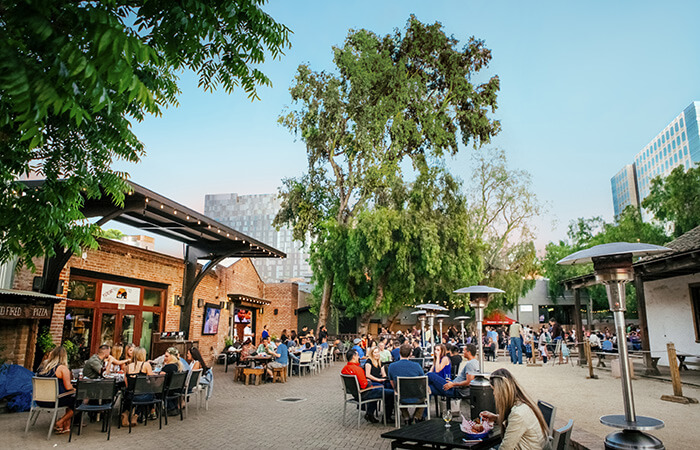 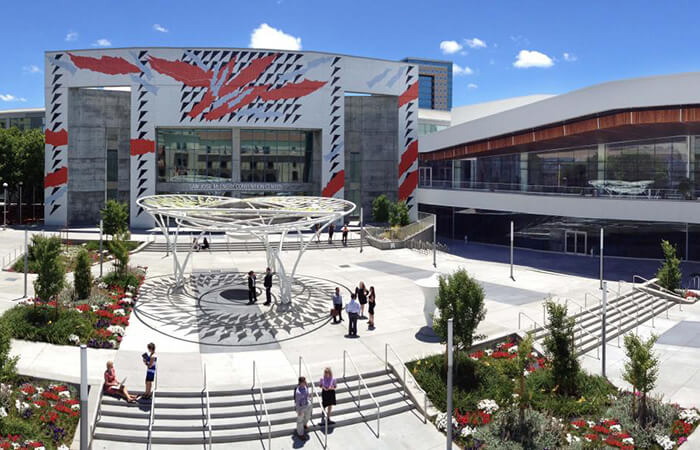 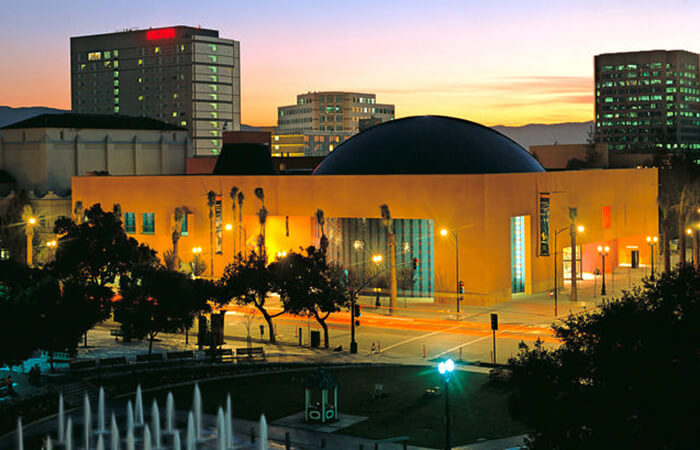 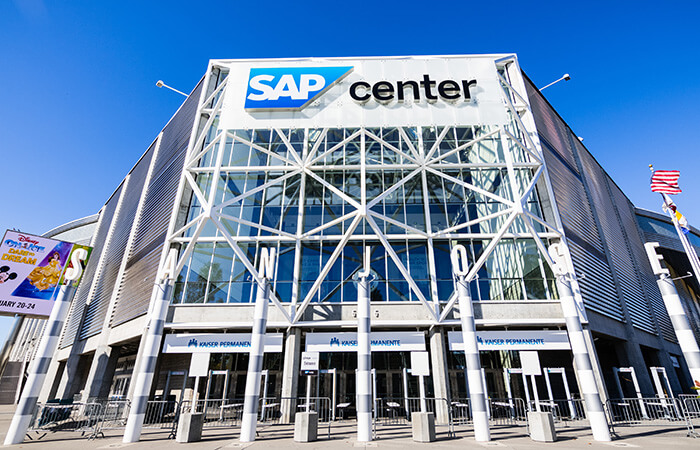 Inevitably, these projects’ designs will influence San Jose’s style. But what connects them to the city’s urban fabric isn’t aesthetic—it’s programmatic. Each project’s amenities enable an urban lifestyle that’s active, social, and creative, while offering an opportunity to shorten commutes. “The goal is to balance jobs and housing, not just for San Jose, but for every community,” McClain says. “Locating workers closer to their jobs not only increases their quality of life, but at the same time the carbon footprint of each employee and the company as a whole is reduced.”

Learn how to use BIM to create smart cities and campuses.
Read More

Learn how to use BIM to create smart cities and campuses.
Read More

The projects are also intended to connect to the communities surrounding them. MIRO, for instance, engages directly with East Santa Clara Street, under which the BART extension will run. Modera San Pedro Square interfaces with its neighbor, the Tabard Theatre, and Invicta will use its own theater to draw the community in.

“The new buildings we’re designing downtown go beyond painting pretty pictures,” McClain says. “They’re less about creating a facade and more about creating experiences. We’re thinking about how residents and visitors in downtown San Jose are going to feel in the places we’re creating. And that, I think, is really the essence of placemaking.”

“We’re responding to the existing environment in an informed and innovative way,” McClain continues. “If you use the context and gifts of the city, your buildings will start to have a similar palette while still being very unique.”

Through a Local Lens

As they wait for a shared palette to come further into focus, Knies and McClain agree: Local talent is the secret weapon that will help San Jose finally realize its own vibe and voice.

“Large developers often hire architects who are cranking out products in dozens of cities at a time, so their work is somewhat generic,” Knies says. “They’re not in it for the big picture. A few hire architects who want to create something provocative and enduring because they have deep local roots and a sense of civic commitment. We need more architects who take that approach.”