When it comes to development in the third world, not all investment is created equally.

Although many local/indigenous populations are eager to develop and modernize, they’re often also desperate to do so in an environmentally and culturally sustainable manner. One great example of this dilemma is Vorovoro Island, a mile-long strip of land covered in light tropical forest on the northernmost tip of Fiji. China has been pouring money into developing third-world locations such as Fiji but has also done so while causing alarming environmental destruction and ignoring environmental regulations.

Vorovoro’s tribal chief, Tui Mali, has actually turned down opportunities to develop and modernize Vorovoro because they were not compatible with a traditional, sustainable, Fijian way of life. A retired ship worker who spent 25 years laying fiber optics, Tui Mali has a plan for a cultural center on the island to promote, celebrate, and share the traditional Fijian ways of social interaction, craft, diet, and sustainable living—not only to educate visitors but also to help his own people keep their traditions alive.

The Vorovoro people possess a strong sense of pride and self-sufficiency. Now, they’re making a new roadmap to bring traditional ways into the world. And it’s starting with a dam.

A project like the proposed cultural center requires services, chief among them water supply. Despite Fiji enjoying an active tropical rainy season, Vorovoro needs water storage to sustain development, so it seeks to build a dam. The proposed dam site is on a mountain, in a natural bowl that could be dammed to retain more than 2 million liters (528,344 gallons).

Social-impact company Bridge the Gap—which connects visitors with the region through positive social and environmental programs—has assembled a team of engineers, designers, and other experts from Arizona State University (ASU), Auburn University, and Autodesk to study the feasibility of a dam that would provide water year-round. Rather than trudging into the mountains with measuring tapes and concrete sacks to get things started, the project called for a more modern approach—and student help to make it a reality. 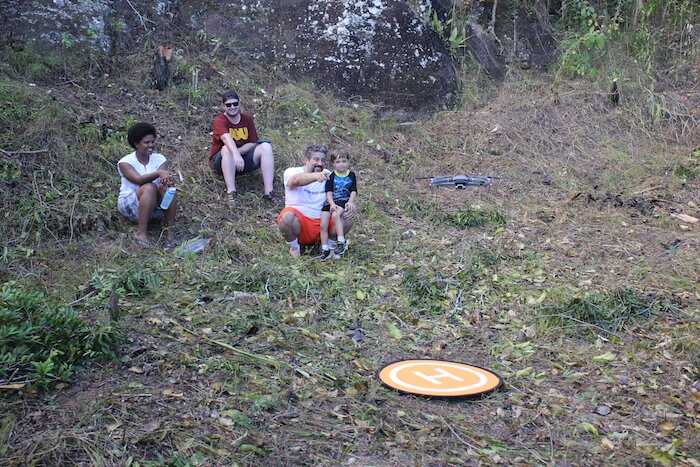 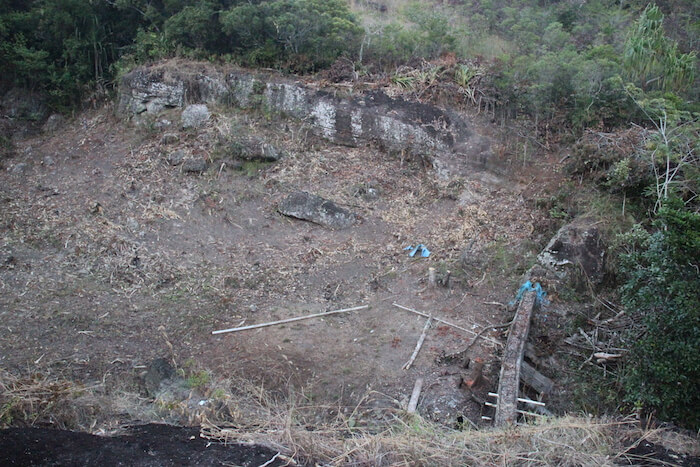 The drone-captured material was used to create a digital 3D model of the site. Courtesy of Dace Campbell. 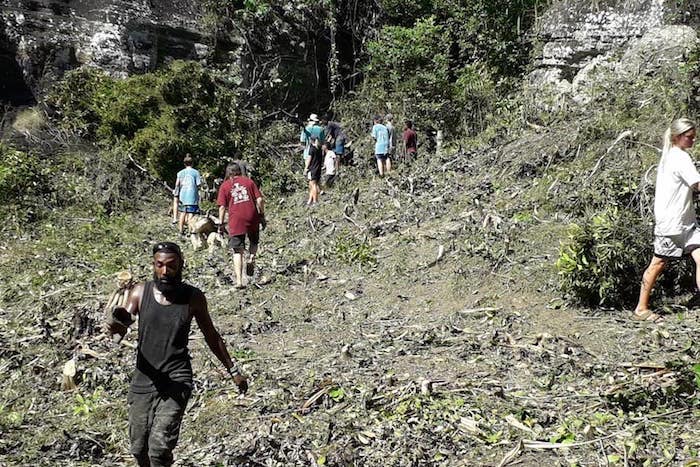 Students and the Mali people worked on clearing the dam site. Courtesy of Dace Campbell. 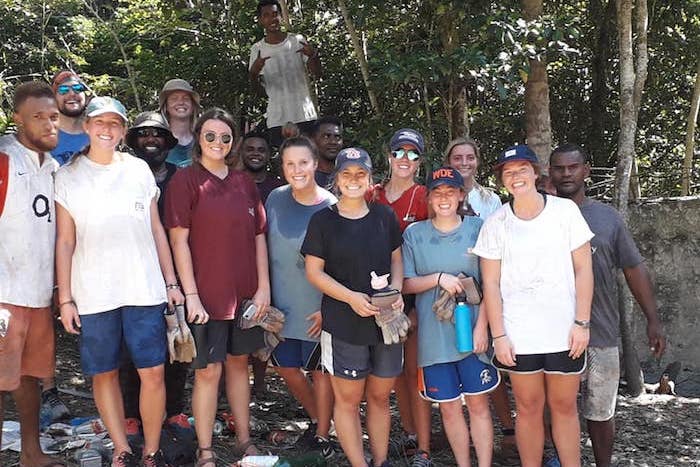 A group of Fijians and Auburn University students after a sweaty work session. Courtesy of Dace Campbell. 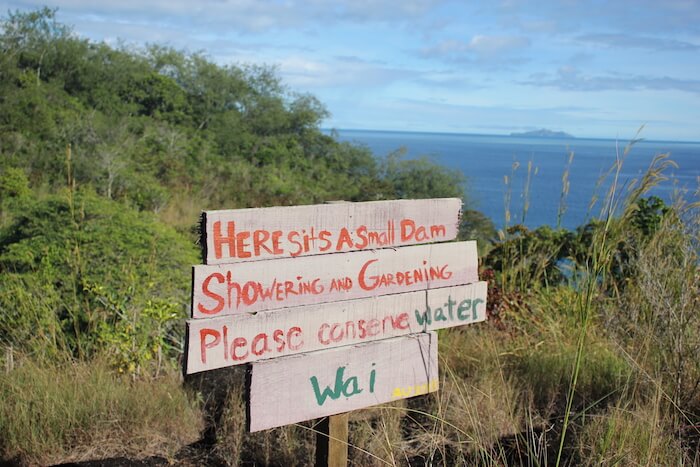 To prepare students for job readiness in the future of construction, Autodesk supported a graduate-level class at ASU in spring 2019. Students flew a drone over the proposed site to capture thousands of photos and videos of the area. This data was then used with photogrammetry to construct an accurate 3D digital model.

To support collaboration among a global team, Autodesk BIM 360 Docs stores the project models and drawings in the cloud. It also generates cross sections for studying the location, height, and character of the dam wall as part of the feasibility study. But the key has been the virtual-reality (VR) simulation of the dam in situ, which lets viewers “walk through” the site and experience it at full scale both from above and within.

VR is a unique tool for both supporting effective decision-making during the feasibility study and attracting the design and construction partners needed to build the dam. But most important, the Vorovoro people have been fully involved from day one, lending their expertise in sustainable planning and construction. Jenny Cahill, Bridge the Gap’s founder and director, is an erstwhile Vorovoro resident who says the villagers are very traditional but very open. “They’re not removed from the idea that we can progress a lot faster than normal using technology,” she says. 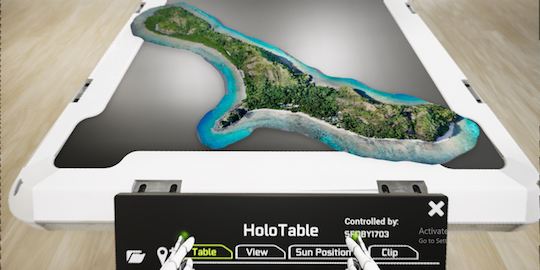 “The project is rooted in cultural and environmental preservation, addressing development goals while keeping what’s important to the Vorovoro people intact,” Cahill says. “In any kind of development there are compromises, but because it’s a partnership with the local people, every decision is made according to their desires versus traditional tourism.”

It’s a deliberate process, emphasizing the training and mentorship of Vorovoro residents to promote more active roles. And Bridge the Gap wants to bring in the right partners. It’s not about finding the best architect, fastest builder, or cheapest supplier; it’s about creating a “mutual learning and exchange of information and skills that everybody can feel good about,” Cahill says.

When outsiders work with the Fijians, collaboration, trust, and teamwork mean everything. “Once you spend some time there—even the most straitlaced person who comes at things from an academic perspective—you always leave understanding what Tui Mali means when he says, ‘One plus one equals one,’” Cahill says. 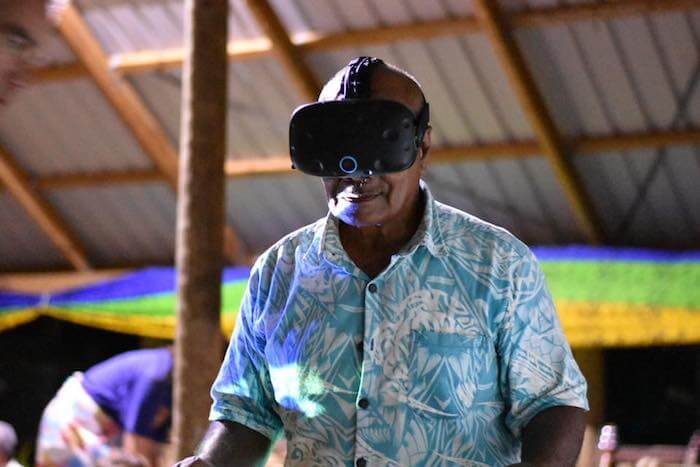 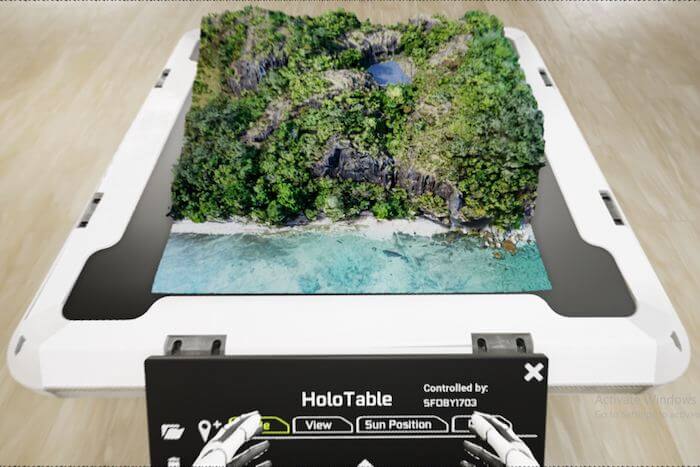 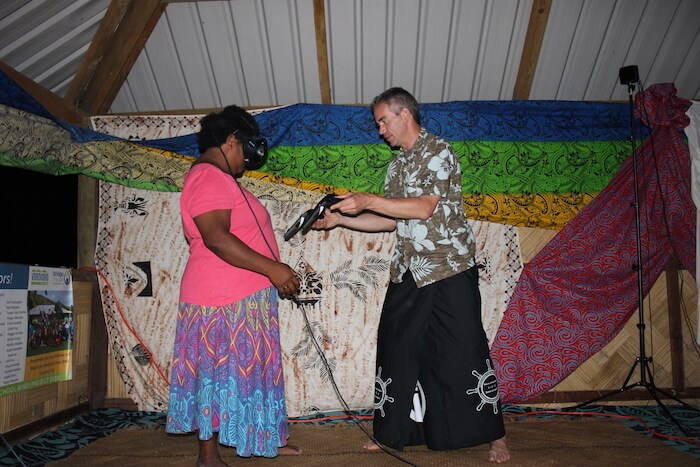 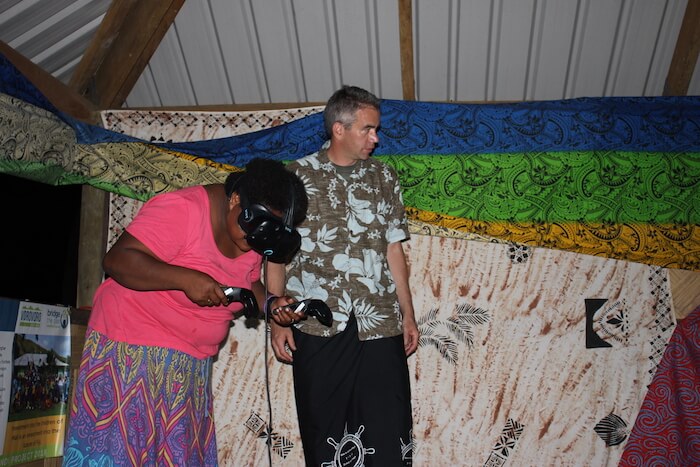 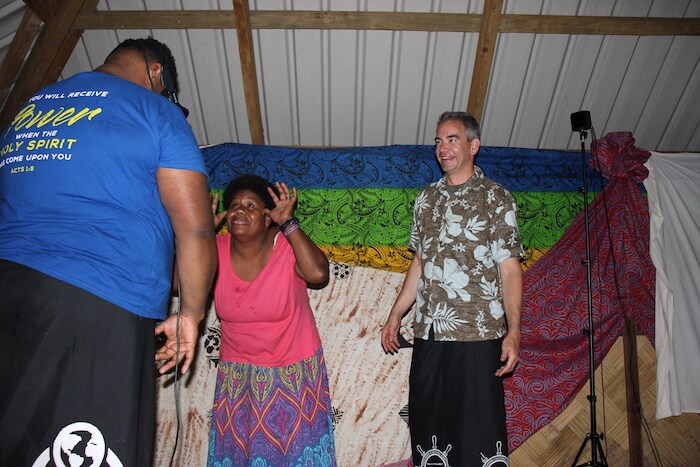 Using traditional surveying methods to measure what’s essentially a huge natural basin would have been labor intensive, potentially dangerous, and not nearly as thorough.

“We’d likely have had to use surveying equipment—either bring it or find it in Fiji to rent or borrow,” says Dr. Anthony Lamanna, the dam project’s technical lead and the Sundt Professor of Alternative Delivery Methods and the Built Environment and chair of the Del E. Webb School of Construction at ASU. “Or we would have just built it, which wouldn’t have been optimal. Our drone model showed that the basin is deceptive. For instance, a slightly higher dam would provide increasing returns on water storage.”

But the VR model was easier; cheaper; and as Cahill puts it, “just incredibly cool.” It also made it easier to convey the plans to Vorovoro village elders who couldn’t physically make the trip to the site to inspect it, as well as to show prospective partners abroad not only what the dam might look like but also its cultural and environmental goals.

Using an HTC Vive display and NVIDIA Holodeck platform, the VR participant can inspect the plan from every elevation, angle, and direction. “If people have technical questions about the site, we ordinarily might not have the answers,” Cahill says, and it is especially resource intensive to seek measurements from a project site across the globe. “But now we have the 3D-model files, so they can put on the glasses and more or less be there to take the measurements or whatever. It saves times and money, and it’s a much more efficient way of assessing the entire project.” 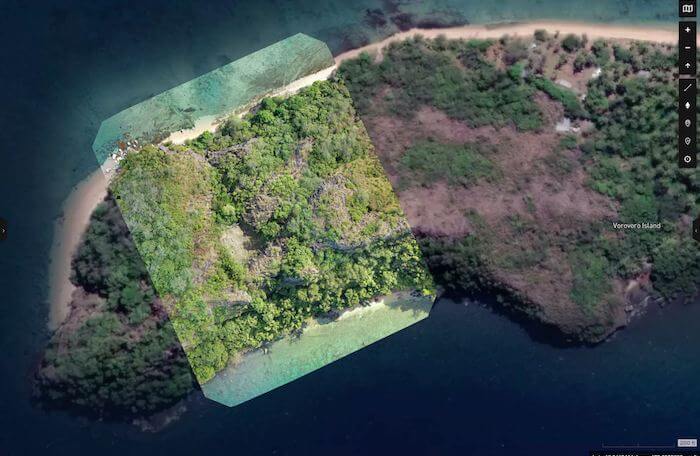 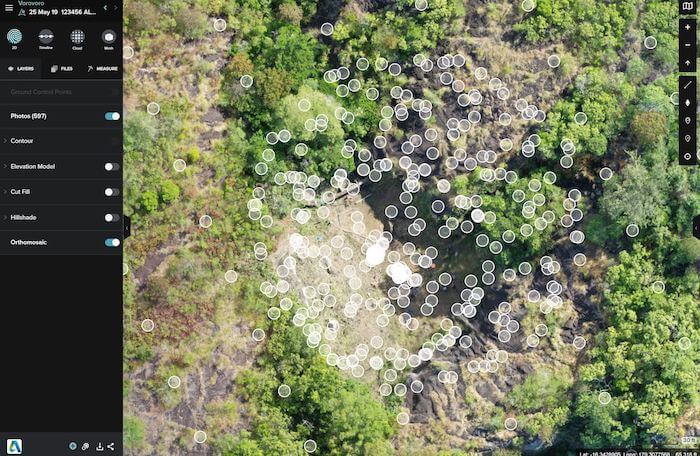 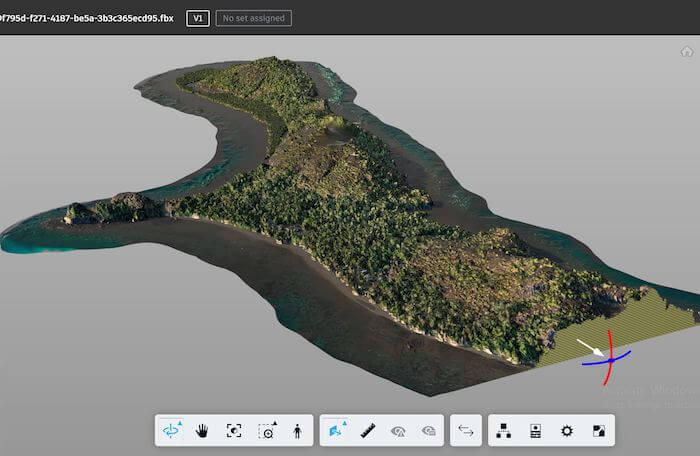 3D models and VR helped present the dam proposal to Mali tribal elders who could not make the trip to the physical site. Courtesy of Dace Campbell. 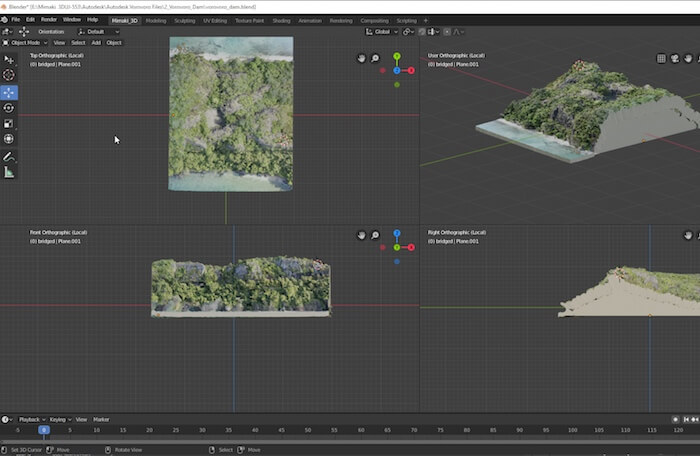 The final software preview before 3D printing a model of the site. Courtesy of Dace Campbell. 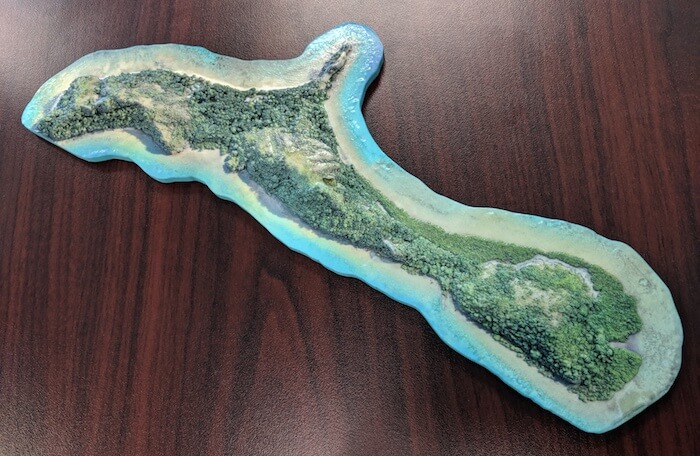 Scale 3D-printed models of Vorovoro Island and the dam site were made from the digital models and Mimaki printers. Courtesy of Dace Campbell.

A digital representation is just the first step in the dream becoming a reality. With the help of Mimaki 3D printers, Autodesk is creating accurate, color, 3D-printed scale models of the island and dam site. These, along with visuals from BIM 360 and the VR simulation, will be used to present the optimal dam later in 2019. Then there’s the matter of actually building it.

Lamanna says ASU’s Del E. Webb School of Construction, Bridge the Gap, and the Rand Corporation are working on funding to turn the project into a guidebook in sustainable development while respecting the local culture. They are also pursuing a Rotary International global grant for the water portion.

The Vorovoro dam will be a global, multifaceted effort. In another age, such networks would have been beyond the reach of a small island community in the middle of the Pacific Ocean. But digital tools simulating the built world can convey the project’s potential to a wider audience while keeping the agency with the Vorovoro people to preserve and share their heritage.