New technology such as the Internet of Things (IoT)—a networking capability that allows data to be sent to and received from objects and devices—is influencing how cities are being built and digitally transformed. But if the collected data isn’t being analyzed in real time, it’s not worth much. What if data collected in cities through sensors and other means could actually help the metropolises evolve and optimize, becoming true smart cities? In this video, learn about the origins of the smart-city concept and see cities that are at the forefront.

What does the ancient city of Rome have in common with Los Angeles and this desert metropolis with a population of zero?

Although built thousands of years apart on different corners of the map, each was constructed on the fundamentals of being a smart city.

So, what is a smart city? That depends on who you ask.

The most common denominator is data. And it’s what a city does with that data that makes it smart.

Today’s version of a smart city uses Internet of Things, or IoT sensors, that collect and interpret data to advance our day-to-day lives. Cars that steer themselves, networks of crime prevention, roads that power the vehicles above them—all IoT concepts that could be coming soon to a city near you. By these advanced definitions, there are few cities on Earth that achieve this standard, if at all. But some may argue that cities have always been smart.

In 753 BC, the Roman citizenship census was established. Every five years, citizens were required to register their property and possessions to the government, creating one of the earliest data compilations that was used to inform municipal decisions, ranging from defense and trade to natural-resource expansion—an early form of community market research.

The late 1960s brought a major step in smart-city advancement with the Urban Information System of Los Angeles. For the next 10 years, the Community Analysis Bureau would use computer databases populated by early infrared aerial photography to create reports on neighborhood demographics. 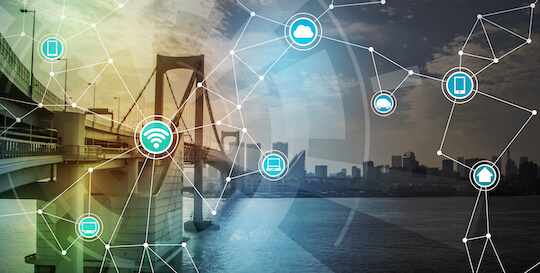 Read about the technology for smart cities of the future.
Read More

Reports produced from this research categorized population clusters with names like “The Singles of Los Angeles,” “The Suburbs From the ’50s,” “Richest of the Poor,” and more. This observational data collection affected city-planning efforts and helped shape Los Angeles neighborhoods into what they are today.

In 2015, the tech firm Pegasus Global Holdings decided that observational market research wasn’t enough for their smart-city development vision. What followed were plans for a fully functioning faux city designed to resemble a modest American town, but no one would live there.

The Center for Innovation Testing and Evaluation (CITE) built offices, houses, and highways—only for testing.

The Center for Innovation Testing and Evaluation, also known as CITE, would include office buildings, parks, houses, and its own interstate highway, all used to test sensor-based technologies at a large scale. Concepts like intelligent transportation, alternative power generation, and public monitoring could be experimented with and observed without the human population getting in the way.

The data collected is fed into an online system that helps officials see how the city is functioning at any given moment.

The same technology that wirelessly charges your toothbrush is being tested to power electric buses in Seoul, South Korea. Coils laid below the surface of the road charge these buses while stopped along their routes. The data from these tests will determine how many buses this infrastructure can support.

In Amsterdam, home batteries are being networked together to create a virtual power plant, allowing people who own their own solar panels to transfer their surplus solar energy on the wholesale market.

2030: Expanded smart grids across the world

Urban population is projected to reach 6.7 billion by 2050. By 2100, total population will likely reach 11 billion. We’re going to see sweeping changes around the globe as we adapt to meet this growth.

As long as there have been cities, government, and colonies, there has been data contributing to them. Communities have always had to be smart in order to expand and survive. They’re just getting smarter.

We’ll soon have to ask ourselves—how smart is too smart?

4 Reasons to Embrace the Business Value of BIM for Owners