March may be named after a Roman god, but the calendar says otherwise: Women in Construction Week is March 1–7; International Women’s Day is March 8; and Women’s History Month is all day, every day this month.

Unfortunately, the construction industry hasn’t gotten the memo—yet. In the United States, women hold 9.9% of construction jobs. Most of these are office positions; women hold only 1% of trades jobs. When you consider that there’s a huge skilled and technical labor shortage in the industry, it’s easy to think that women could be an untapped resource. Addressing the gender gap won’t happen overnight, but across the industry, slowly but surely, women are making strides. Read about how forward-thinking companies and organizations are paving the way for the next generation of women in construction.

Miron Construction Invites Girls to Roll Up Their Sleeves

“Construction is for girls, too!” is the rallying cry behind Build Like a Girl, a free annual event sponsored by Miron Construction that encourages students in grades 7–10 to learn about construction trades through hands-on projects. The 102-year-old Wisconsin-based company has also partnered with other industry leaders to host Smart Girls Rock!, an event that introduces female high school students to STEM-related careers, including those in construction. As the construction industry shifts from analog to digital, Miron recognizes that technology is a glittery lure for today’s younger workers, regardless of gender. The firm’s use of tech innovations such as reality capture and virtual collaboration systems is another way to help attract the next generation to the field. Read the article. 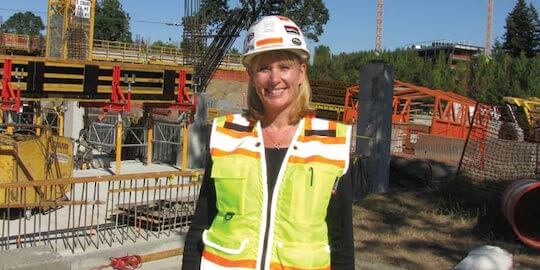 Across the Pond, Kier Group Also Focuses on Outreach and Tech

In the UK, women make up just 12% of the workforce in construction. At Kier Group, the UK’s second-largest construction company, that number is slightly higher, at about 17%. The company is addressing gender equality through several initiatives, including a Gender Strategy Group, which aims to understand the challenges that women face in construction and to implement strategies to make Kier more inclusive. Kier Group is also trying to close the labor gap by pledging 1% of its workforce to serve as career ambassadors at schools and universities, where they engage younger generations—and smash old industry stereotypes—by promoting advanced technologies. Read the article.

Outreach programs and pre-apprenticeships are supply-based ways to improve gender equality. But focusing on demand—by developing policies that compel project owners and contractors to hire women—is an equally important method.

That’s the thinking behind the Policy Group on Tradeswomen Issues (PGTI), an organization created in 2008 to remove the barriers to good jobs for women in the construction trades. “If you leave gender diversity up to just the owner and the general contractor, they’re going to decide it’s too hard,” says PGTI cofounder Elizabeth Skidmore, a Boston-based carpenter. “But when you’ve got everyone at the table—labor unions, for instance, and community organizations—everybody is held accountable.” PGTI’s broad coalition of stakeholders not only collaborates on research and policy recommendations but also enforces them—and the group’s efforts have paid off, with Massachusetts’s public construction projects employing a more diverse workforce since 2015. Read the article.

Workforce Diversity Is Good for Business

The business case for diversity is solid: It boosts employee engagement, job satisfaction, and performance. Diversity and inclusion (D&I) initiatives can also produce less-quantifiable but equally important results such as new ideas, different perspectives, and creative problem-solving, which can all increase productivity. Still not convinced that diversity is important? According to global advisory company Willis Towers Watson, limited workforce diversity will be a top-20 risk for construction firms through 2027.

So, for the diversity-curious, where does one begin? Just as workforce-hiring goals don’t work unless they’re enforced, D&I doesn’t just happen: Companies must commit to strategies that support an inclusive culture. Mott MacDonald Group, for example, uses unconscious-bias training to foster more inclusive language and behavior, as well as reverse-mentoring to pair senior leaders with junior colleagues from underrepresented groups. These and other D&I programs have produced a cultural shift at the company, and its policies are being adopted by clients, contractors, and suppliers. Read the article.

“Women have the qualities that just lend themselves to be leaders in our industry,” says Nancy Juneau, CEO of Juneau Construction Company, an Atlanta-based firm of 160 employees. The former educator overcame others’ doubts about her ability to lead by educating herself—and ultimately gained the confidence of her clients, subcontractors, and staff. Now, when mentoring women in construction, Juneau acknowledges the industry’s gender gap but tells them, “Often, I’m not the only woman in the trailer any longer.” Still, being a minority can work to women’s advantage, she says: “You’re going to stand out. In the end, that’s a good thing.” Watch the video.