Zero net carbon is often thought of as a “modern” design concept, but it’s been around for a long time. One could even argue that buildings constructed before the Industrial Revolution were closer to net zero than they are today. But designers, engineers, and builders have been working to achieve net zero for 100 years. Watch the video to learn how innovators and current events—from Buckminster Fuller to the Middle East energy crisis to Architecture 2030—have inspired today’s energy-forward thinking.

Narrator: What modern design concept was better used 200 years ago than it is today? Zero net carbon.

A building that is zero net carbon has been built to balance its greenhouse gas emissions from traditional energy. Today, this means first reducing energy use to minimize the amount of associated carbon emissions and then using renewable energy and possibly purchasing carbon offsets to reach a break-even point—for example, building envelopes that channel natural light and ventilation during the day paired with captured solar energy that provides heat at night, using design to reduce energy and technology to create energy. This strategic give-and-take is what makes zero net carbon possible.

You could argue that before the Industrial Revolution, buildings were closer to zero net carbon than they are today. Artificial heat and light came largely from burning biomass, and fresh air came from natural ventilation. Mechanical systems weren’t widely used, so, naturally, buildings were closer to a break-even point because they weren’t adding as much net-new atmospheric carbon. But despite today’s energy needs, designers, engineers, and builders have been working toward reaching net zero for longer than you might think.

In 1933, architect and inventor Buckminster Fuller developed the Dymaxion House, a prefabricated home that could be assembled in less than two days. Its roof was designed to ventilate hot air upward and cool air downward: an all-natural air-conditioning system. As advanced as the Dymaxion House was, Fuller’s greatest influence may have been his philosophy of connecting architecture to ecology and the environment.

Middle Eastern instability and conflict in the 1970s led to quadrupled oil prices and forced an energy-conservative mindset throughout an oil-rich region of the world. As energy costs skyrocketed, government and industry leaders grew concerned with their economic dependency on fossil fuels. 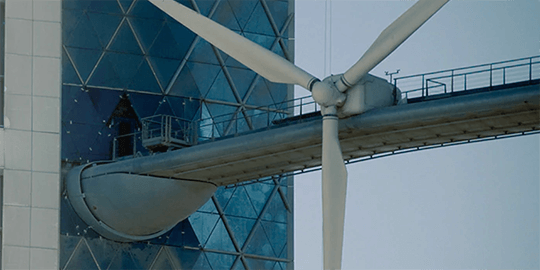 In 1998, the US Green Building Council launched Leadership in Energy and Environmental Design (LEED), a rating system for material, water, and energy usage for newly constructed buildings. LEED evolved into a vital certification program for large, high-profile buildings and made sustainability design a mainstream concept among architects.

In 2002, architect Ed Mazria founded Architecture 2030, a nonprofit that challenges newly constructed buildings to be carbon neutral by 2030. The American Institute of Architects followed up with the 2030 Commitment, a platform that tracks industry progress toward the goals of the 2030 Challenge. In 2006, the Living Building Challenge raised the bar for building standards and their sustainability performance. To achieve Living Building certification, buildings must achieve net-zero energy.

In 2008, the construction of Masdar City outside of Abu Dhabi began: a zero-carbon satellite town that would serve as a research-and-development hub for green technology. Today, the city’s completion date has been pushed back more than a decade, but Masdar City still embodies a hopeful vision.

In 2014, Seattle’s Bullitt Center announced that it was net-energy positive, generating almost twice the energy it required while consuming only one quarter of the energy of a similar building. The 52,000-square-foot, six-story commercial office was designed by Miller Hull to be one of the world’s most sustainable buildings with the help of solar panels and rainwater harvesting systems.

In 2015, nearly 200 countries—including all major emitters of greenhouse gas—committed to the Paris Climate Agreement, a pact to reduce climate-altering pollution over time. Similarly focused, in 2019, the European Commission created the European Green Deal, a set of initiatives to bring Europe to climate neutral by 2050. These ambitious proposals reignited a spirit of activism in the public sector and shifted the conversation toward wide-scale change.

With the year 2030 just a decade away, Architecture 2030 created a new challenge that encompasses taller structures. The goal: zero-carbon emissions for the built environment by 2040.

Although still aspirational, zero-net-carbon buildings remain an important standard to strive for—using technology as a tool to satisfy society’s energy needs while also reducing its carbon footprint. Energy-forward thinking will continue to fuel the drive to reach zero net carbon. As Buckminster Fuller once said, the idea is to “do more and more with less and less until, eventually, you can do everything with nothing.”