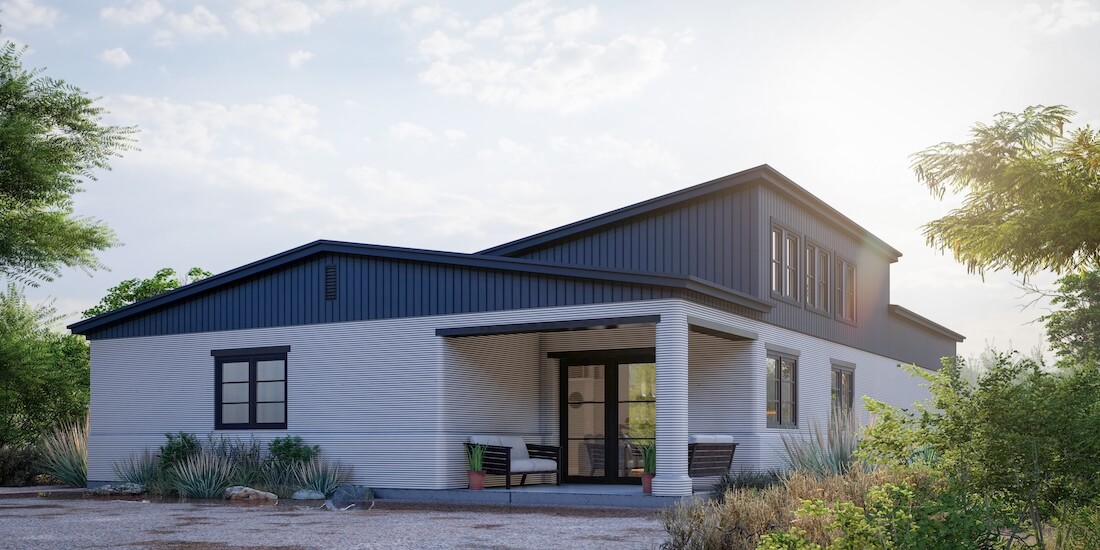 In record-breaking heat—110 degrees day after day in Tempe, AZ—Habitat for Humanity’s 3D construction printer chugged along, laying down rows of mortar to create the nonprofit organization’s first 3D-printed home: a single-family, three-bedroom structure with a footprint of 37-by-70-by-25 feet and livable space totaling 1,722 square feet.

This project will help determine the viability of 3D printing affordable homes. “We hope to contribute to the base of knowledge that’s going to go into this,” says Jason Barlow, Habitat for Humanity Central Arizona president and CEO. “Someday, this might be a normal business practice: Just pull out a printer and print your own home.”

The heat wave made for terrible conditions for any kind of construction and created extra challenges for the COBOD BOD2 3D construction printer as it worked. The mortar mix and printing speed needed to be just right for weather conditions, says Samuel Hager, application engineer and project lead for Peri USA, the company providing the BOD2 printer, printing material, print files, and expertise. If the team went too fast or made the mix too wet, and the wall would slump. If it went too slowly, the rows wouldn’t adhere well to each other. (Temps below freezing also make it hard to pump out the mixture.) 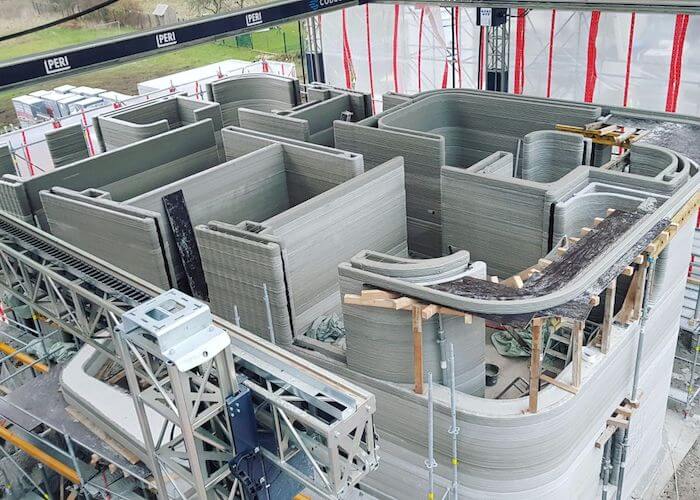 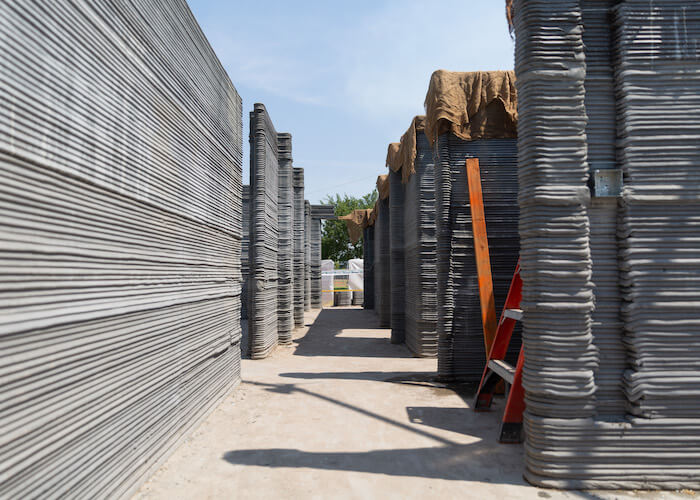 These are 3D-printed walls from Peri USA, which provided the printer, materials, files, and other expertise for Habitat for Humanity’s first 3D-printed home. Courtesy of Peri/3D Construction Inc. 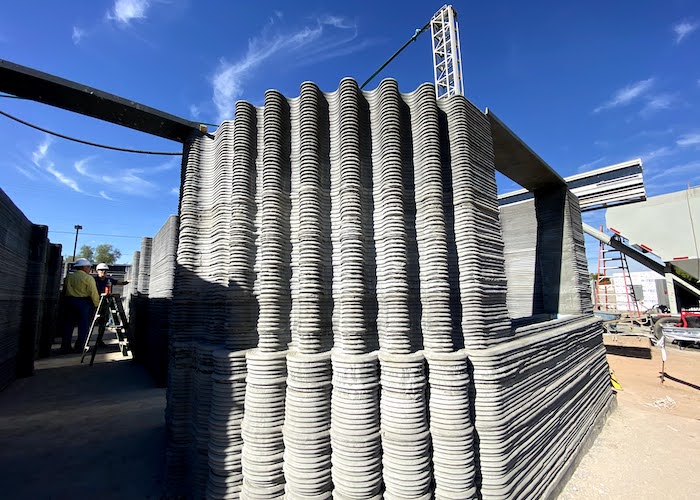 The 3D-printed walls can be smoothed as they’re printed or left in their original layers. Courtesy of Peri/3D Construction Inc.

Despite the challenges, printing completed mid-June 2021, ready for Habitat volunteers and the future homeowners to build the conventional roof, install flooring, hang doors and cabinets, and paint. Although it’s possible to smooth the walls as they’re printed, the interior and exterior walls of the Habitat house will be left as printed in wavy layers.

“Habitat is all about decent, affordable housing for people who need it,” Barlow says. “Especially with the way the market is going in the area, we’re always searching for innovative ways to build homes better.”

He’s considered pressed-earth block construction, polymer from recycled bottles, and hemp blocks. Some 19 months ago, Clarence McAllister, a principal of 3D Construction, approached Barlow with a proposal to use Peri’s additive process.

Habitat already had a site and city-approved plans for a conventionally constructed home. It tapped Candelaria Design Associates to modify the plans to work with printed technology. Candelaria specializes in custom homes, but principal Mark Candelaria is on the Habitat board and donated the firm’s expertise.

Thanks to donations of materials, expertise, use of the BOD2, and the land, this Habitat project could serve as a prototype and a learning experience for all.

Collaborating with Peri, Candelaria took the existing Autodesk AutoCAD files and put them into Autodesk Fusion 360 to remove BIM (Building Information Modeling) data, creating a file that would direct the path of the printer as it laid down the walls, with finishing touches provided by Peri. It was crucial to get this right: “Once you print it, it’s there,” says Damon Wake, Candelaria team director and project manager.

One hurdle was 3D printing building codes: The International Building Code (IBC) does not yet address this kind of construction. “It was difficult to create a structure to pass code,” Wake says. “We had many Zoom calls with City of Tempe officials.”

For example, the printer produces a pair of parallel, 2-inch-thick walls with a space in between. But Candelaria wasn’t permitted to use the walls to support the roof, so it added reinforced concrete piers in the wall cavity supporting glue-laminated beams. The structural engineer also asked for horizontal joint reinforcing.

Based on this experience, Wake thinks it would be faster and cheaper to use conventional framing and drywall for non-load-bearing interior walls. He also points out that the irregular interior wall surfaces make installing cabinets more complex.

“It’s not just about being fast for the printer; it’s being fast for everybody else,” Wake says. “This technology needs to figure out its strengths and weaknesses to be useful for the construction industry.” 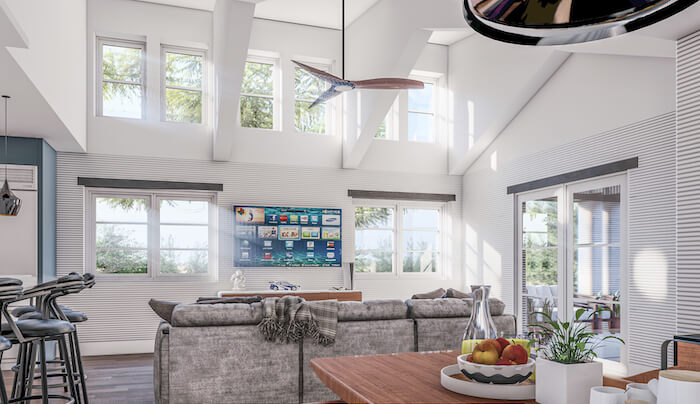 An interior rendering of the first Habitat for Humanity 3D-printed home. Courtesy of Candelaria Design Associates. 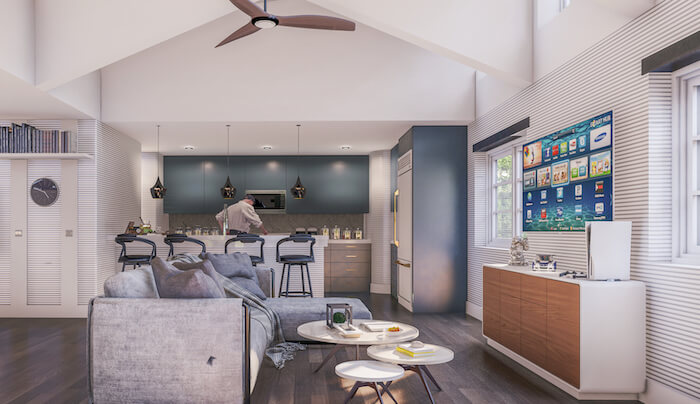 Another interior rendering of the first Habitat for Humanity 3D-printed home. Courtesy of Candelaria Design Associates.

The proponents of 3D-printed construction say the technology has the potential to build faster while reducing labor costs and wasted material. In addition, the mass of concrete can make the structures more energy-efficient and better able to withstand earthquakes and severe weather. Skyrocketing lumber prices and a shortage of skilled labor make 3D printing look even more attractive.

According to CNN, SQ4D claims that the Riverhead, NY, house it recently sold was 50% cheaper and 10 times faster to build than conventional construction. Mighty Buildings sells preprinted homes and modular homes with printed panels and claims its process eliminates 95% of waste. Palari Group plans to build a 15-home community in Rancho Mirage, CA, in partnership with Mighty, for which Palari estimates cutting construction time by 50%.

New Story, a builder of social housing for impoverished communities, built a demonstration project in Austin, TX, in 2019 and calculated it could save $2,500 per home with the technology.

Habitat won’t be able to cost out the project until construction is completed. Even then, because of the novelty of this construction method, it will be difficult to compare it to traditional construction.

“All the projects you see right now are prototypes,” says McAllister of 3D Construction. “Whether we can be competitive is still to be determined.”

Peri’s Hager says the Habitat project will be competitive with standard stick-built construction—and future projects will be even cheaper. “There’s a whole lot of room for costs to go down, but we do know that we can go faster with fewer people,” he says. “In the right conditions, that means one day to deliver and set up the printer. We believe within two weeks, we could be packing up and heading home.”

Building a Habitat house typically involves 25–30 volunteers and takes a few weeks to build, but Hager points out that the BOD2 requires just two people, one at the computer adjusting the printing speed and one at the pump checking the quality of the material. So instead of Habitat deploying those 25 people on one house, Hager says, “They can bring in two people, a pump, and a printer and do the same amount of work in the same time or less.”

“This could be a game changer for affordable housing—and any housing—if we could significantly reduce the cost and time of construction,” says Habitat’s Barlow. “Where this will become more affordable to us is when we can print five or so two-story townhomes attached in a row at one time.”

Wake adds that the project has generated a lot of excitement and attention from the public because it’s something new. “From the standpoint of a designer, there still is a long way to go to make it effective … and to make sure that it’s a better alternative,” he says. “You want to make sure you’re not doing it because it’s novel but because it produces something you can’t get in another construction technique.”

There’s another priceless aspect of the project: The organization is always looking for more sponsors and volunteers, and Barlow hopes this will interest people from the technology industry who haven’t paid a lot of attention to Habitat.

“It was a grand laboratory,” he says. “Maybe this will open a door.”

This article has been updated. It originally published June 2021.