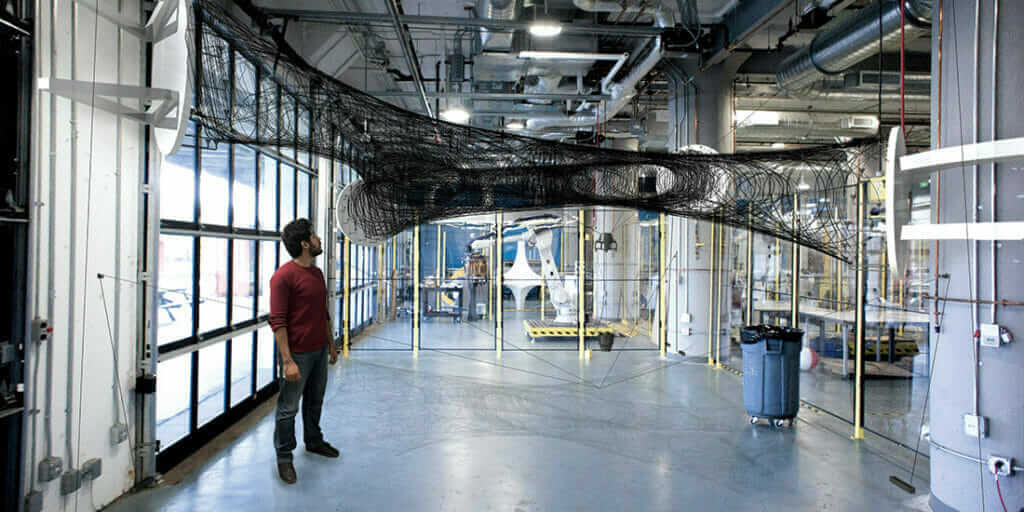 On any weekday, Chicago’s downtown business district, the Loop, teems with harried humans crossing the street like herds of wild antelope fleeing a predator. Most scurry past the Field Building without considering its significance—or that of the historic building demolished in 1931 on the same site: the Home Insurance Building. Built in 1884, it was the first tall building erected on a frame made of structural steel—a light, affordable, and durable material that allowed structures to be built taller, stronger, and faster than those made of wood or stone.

Considered the world’s first skyscraper, the Home Insurance Building changed the course of architecture, engineering, and construction forever by demonstrating that steel was a viable building material and steel-frame construction a viable technique. It was only 10 stories (138 feet) high but was the forebear to every tall building constructed since—including the current world’s tallest building: the Burj Khalifa in Dubai, at 206 stories and more than a half-mile tall.

More than 130 years later, steel and steel frame remain kings in skyscraper construction. But innovations in composite carbon-fiber materials and robotic-fabrication techniques could mean a new despot will soon unseat them. And if research occurring at the Autodesk Technology Center in Boston is any indication, it could be just as transformative.

What Is Carbon Fiber?

One of the most promising composite building materials for the future is carbon fiber. A polymer comprising long, thin strands of carbon atoms bound together in a crystalline formation—each strand thinner than a human hair—it’s lighter than steel, five times stronger, and twice as stiff. As such, it’s particularly popular among manufacturers, who twist its strands together like yarn that can be woven into fabric or molded into permanent shapes. This process is used for everything from bike frames, fishing poles, and aircraft wings to race-car bodies, golf-club shafts, and sailboat masts.

“Carbon fiber and other composite materials are highly performative, meaning they have a very small weight but can take enormous loads,” says architect and recent Autodesk Technology Center resident Simon Kim, principal at Ibañez Kim, an architecture and design firm in Cambridge, MA.

Because carbon fiber has such unique properties, Kim and others believe it makes an ideal building material. “Composites represent a very interesting opportunity for rapid fabrication and customization,” says Kim, adding that it would take just weeks to build the enclosure for a small house out of carbon fiber versus months with conventional materials. “Composite structures can be erected rather quickly and do not require much in terms of specialized labor and work flows—from general contractors and subcontractors to material supplies, for example. We can therefore go faster, the delivery chain is shorter, the amount of material is reduced, and it’s less expensive.”

Thanks to its flexibility and light weight, carbon fiber can be easily moved. “Modules can be picked up, taken elsewhere, and chained together to produce larger assemblies as needed,” he says. “That makes composite structures far more flexible than traditional buildings, where there’s an assumption of permanence that is not always a good thing.”

The advent of steel alone didn’t spawn skyscrapers. To leverage steel’s benefits, architects also needed a new building technique: steel-frame construction. So is the case with innovative materials like carbon fiber: Its potential hinges on the development of cutting-edge fabrication methods to bridge the gap between laboratories and jobsites.

During their recent Technology Center tenures, Kim and fellow residents Ayoub Lharchi and Yencheng Lu, University of Stuttgart graduate students, tested and demonstrated carbon-fiber construction methods. Their work portends a future in which the architectural case for composites is as strong as steel—or, more to the point, stronger.

From Sculptures to Carbon Fiber Buildings

Kim began his residency in Boston in June 2017. His goal: to demonstrate that carbon-fiber construction can produce not only superior function but also superior form. His experiments—evaluating the strength properties of different resins to create carbon-fiber-reinforced polymer (CFRP) composites, for example—inform his installations in the real world.

“We’re using temporary construction to not only showcase what carbon fiber can do performatively but also to show that it is culturally beautiful,” Kim says. He highlighted the visual and tactile qualities of CFRP structures in “The Forest of Sound,” a Pew-funded project he completed with opera composer Lembit Beecher for his world-premiere opera, Sophia’s Forest. Unveiled in September 2017 in Philadelphia, the opera featured nine “sound sculptures” created by Kim and his Technology Center team. Each is the size of a human performer, consisting of a wound carbon-fiber shell that houses a mechanized instrument creating ambient sounds during the performance. 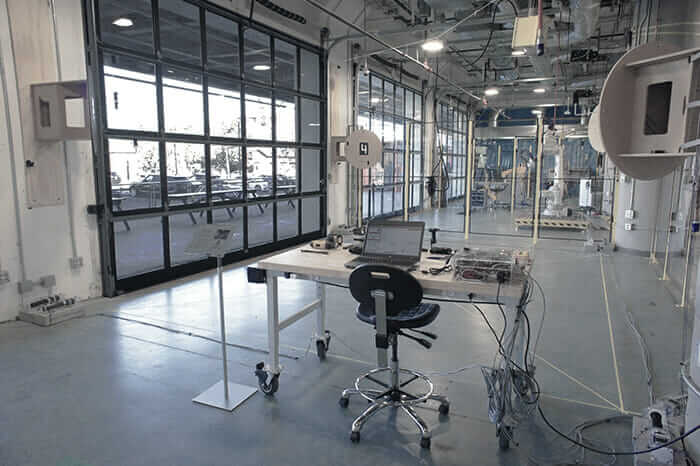 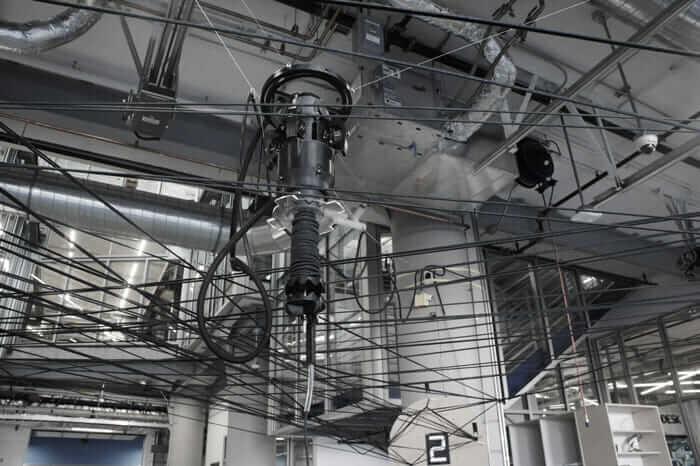 The carbon-fiber fabrication process centered around a fiber-weaving robot. Courtesy University of Stuttgart. 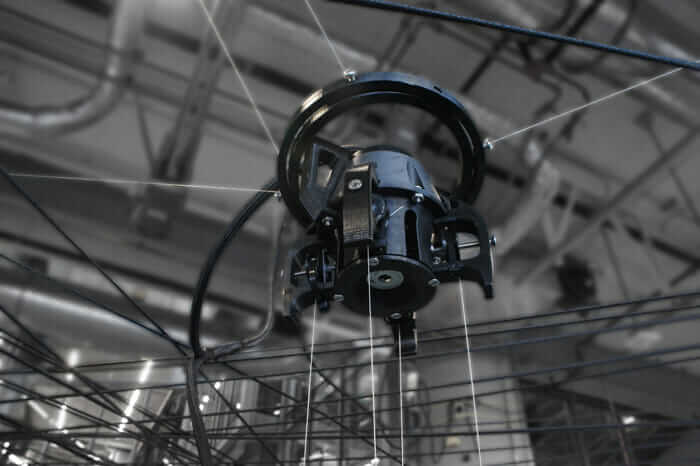 A detail of the robot used in the fabrication process. Courtesy University of Stuttgart.

Although built on a small scale, the portable sculptures—which resemble spider webs or cocoons—hint at carbon fiber’s architectural potential, according to Kim. He envisions a future in which existing structures, such as climate-controlled warehouses, are repurposed by adding carbon-fiber pods or capsules. Essentially, the exterior of the building would remain stable, but the interior could be customized with modular offices or residences manufactured using the same processes and principles as Kim’s sound sculptures.

“We can build new facilities, but we also must face the fact that we have hundreds of years of existing construction that isn’t going anywhere,” Kim says. “To take these concrete, brick, and stone-panel buildings down and rebuild them is difficult in terms of energy offsets and footprints. Why not repurpose them and modernize their function with ‘inserts’ that are extremely well-crafted, lightweight, and affordable?”

Shaping the Future of Fabrication With Carbon Fiber

The natural world is full of interesting geometry, from spirals and spheres to curves and cones. And yet, the built world is too often composed of triangles, circles, and squares. Seeking to unlock a larger catalog of possible shapes for constructed objects, Lharchi and Lu spent their Boston residency exploring the geometric potential of fiber-reinforced composites (FRCs).

Creating novel geometries with FRCs—including carbon, glass, and aramid fibers—requires an effective fabrication method, according to Lharchi. “The best use of fiber is for large-span structures—when you want to cover the roof of a stadium, for example, and you don’t want to have columns blocking the space below,” he says. “If you want to build something like that currently, you can use either a large machine like the ones they use to make 3D-printed houses, which I can hardly imagine on-site, or an industrial robotic arm, where you’re limited by how far the arm can reach. What we’re trying to do is find a fabrication method that’s practical for building one continuous large-scale [FRC] structure.”

“If you’ve ever seen a skycam at a stadium, that’s basically a cable robot with a camera on it,” says Lharchi, who devised a system of two cable robots working in parallel, one on top of the other. As they traverse the cable, the robots exchange fiber back and forth, weaving it in a way that enables unique geometries like a winding syntax. “Anytime you need to create a large, lightweight structure, fiber is a good choice,” he says. “By investigating fabrication methods that are cheap and accessible, it’s my hope that we can make on-site fiber construction mainstream.”

This article has been updated. It was originally published in December 2017.