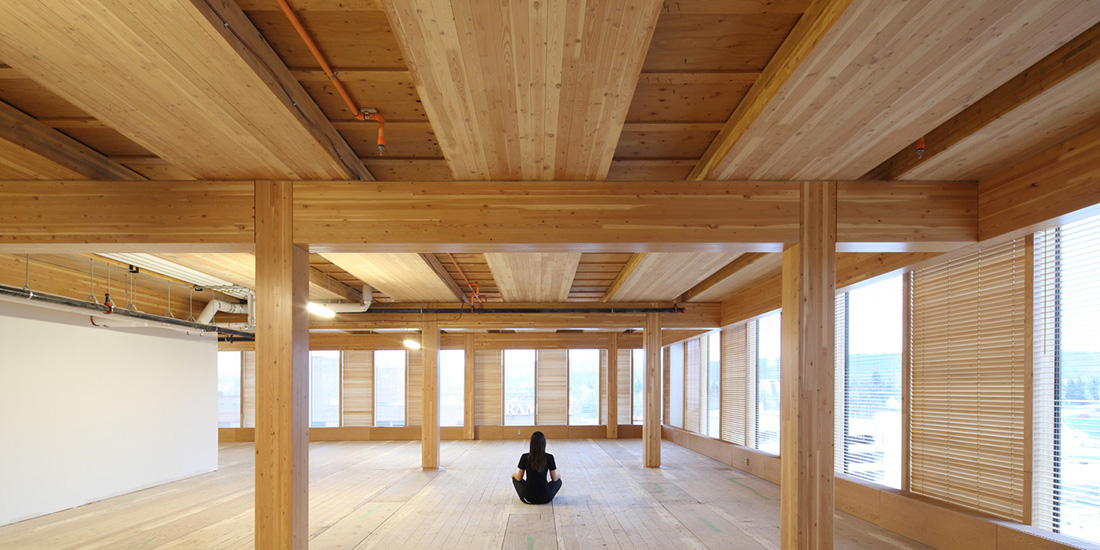 The oldest multistory wood-structure building in the world is almost 1,000 years old, surviving dynasties, weather, and even earthquakes. The Wooden Pagoda of Yingxian in China is nine stories and 220 feet tall. Its rustic, octagonal mass is made from 54 different types of wood joints and not a single nail.

Given this example, the common-sense reasoning why societies don’t build tall wood buildings anymore seems less sensible. Wood is a building material that fabricates itself with a bit of sunlight, dirt, and water. It’s lighter than steel but can be just as strong. And it actively absorbs and sequesters carbon from the atmosphere.

The seductive, plastic possibilities of concrete construction come with an environmental cost architects are coming to grips with. It’s not likely the timber-framed pagoda would survive a building inspection today, but new wood structural systems are being researched and repackaged to reach new heights. It’s called mass timber, and it could drive a materials revolution every bit as transformative as the advent of the I-beam and curtain wall.

What Is Mass Timber?

Some of these systems were invented in North America, but cross-laminated timber (most often used in high-rise building construction) was developed in Europe decades ago. Much mass-timber research involves architects and engineers finding ways to apply existing systems to new building applications. “It really is a matter of understanding what the applications [are], what the benefits are, and doing the research that allows the codes to come up to speed,” says Jennifer Cover, executive director of WoodWorks, an organization that provides technical support to architects and engineers designing wood buildings.

Michael Green, who has become something of a John the Baptist for tall wood buildings, says mass timber is an opportunity for architects to get directly involved in material science and development. “We as a design community can now get back into the fabrication side of the conversation,” he says.

Green says he coined the term mass timber six years ago. His 96-foot-tall Wood Innovation Design Centre (WIDC) at the University of Northern British Columbia is the tallest wood-structure building in North America, and a handful of newer projects are hot on its heels, some of them Green’s. He’s working on proposals for 30-story wood buildings.

What Is Mass Timber Made Of?

There are heavy timber systems that bond together thick pieces of dimensional lumber.

Similar to plywood, laminate systems glue together thinner pieces of lumber and are often used as beams.

Composite systems, made from both concrete and mass timber, compromise by applying wood’s green credentials while also supporting taller buildings. For example, a SOM report on wood construction found that hybrid systems still save 60%—75% of carbon emissions compared to a concrete-only equivalent building. As mass-timber building systems advance, “engineers will determine where in the building the various materials work best to achieve both the desired structural and environmental performances,” Cover says.

What Are the Environmental Benefits of Mass Timber?

In addition to its ratio of weight to strength, the biggest advantage is carbon sequestration. While trees are growing, they pull in carbon from the atmosphere and store it in the wood: The wood used in a 20-story building could sequester 3,150 tons of carbon. In contrast, a large portion of carbon emissions happen during the construction process. The amount of concrete used to build such a structure would emit 1,215 tons of carbon. That carbon impact is equivalent to taking 900 cars off the road for a year.

Additionally, wood is flexible and speedy on a job site; it can be easily cut and altered as needed. And wood can be recycled for many uses once taken out of a building. Wood is often used as a finishing material in large buildings, and its rich natural texture (and people’s attraction to it) demonstrates that it can work as structure, external skin, and internal surface.

Mass timber allows incorporation of a wider array of material quality into supply chains. Because it’s milled into smaller articulated pieces, mass timber can make use of lower-quality wood, like pine trees killed by the beetle scourge that’s decimated forests across many millions of acres, which are currently fueling the relentless wildfires in the Western United States. That’s timber that would otherwise be a waste product or put to a far less valuable use than fodder for high-tech, carbon-positive construction.

What Are the Disadvantages of Mass Timber Construction?

Researchers haven’t uncovered any basic structural or architectural functions wood can’t handle, but itÆs not perfect. Sound dampening is often an issue with wood structures, says Oregon State University Wood Science and Engineering Professor Lech Muszynski. “It’s no accident that your violin is made out of wood,” he says. Wood is also vulnerable to insects; steel and concrete are not. And hot, moist climates require careful detailing to avoid moisture and decay.

As for fire, all construction materials have to meet the same building codes, but because mass timber is thick and solid, it chars on the outside at a slow and predictable rate while retaining strength, slowing combustion and allowing time to evacuate. The char protects the wood from further degradation, maintaining the building’s structural integrity and reducing its fuel contribution to the blaze. That means structures can be built taller using mass timber.

What is Mass Timber’s Impact on American Forests?

Mass-timber boosters counter that the United States’s 751 million acres of forest have been stable for many decades. That’s a massive area one-third of the country’s landmass. “For every eight- to 10-story building we do in CLT, North American forests grow [enough] wood for that every five minutes,” Green says.

A way to encourage stability is to ensure forest acres maintain a high monetary value—for example, using the output to make many more highly sustainable buildings. “Strong markets for wood products give landowners an incentive not only to invest in forest management but to keep lands forested instead of looking to profit by converting it to other uses,” Cover says.

Researchers are investigating other sources like bamboo, the fastest-growing plant on the planet, for mass timber. At OSU’s Wood Science and Engineering lab, scientists are finding ways to use low-value wood in mass-timber building systems.

And architects are looking at different building and infrastructure types ideal for mass timber: big-box stores, university facilities, and bridges. In fact, experts say tall buildings aren’t necessarily mass timber’s signature building type. The material is useful enough, they say, that tall mass-timber buildings are likely to go beyond iconic, someday becoming ubiquitous. “They’re like the Eiffel Tower was for steel construction, a demonstration of the possibilities that this technology gives you,” Muszynski says.

Mass Timber and the Supply Chain

As designers develop the ability to work concurrently with mass-timber manufacturers and integrate into the supply chain, their goal should become “to produce documents that can be directly translated into digitally actionable fabrication,” says Andy Ruff, a senior associate at Gray Organschi Architecture, member of the Autodesk Technology Centers Outsight Network, and research coordinator of the Timber City Research Initiative.

With mass timber, these elements can include structure, facade, insulation, and interior finish. “You can look at one material—one supplier—and create the majority of your building,” Ruff says. This material versatility increases the potential for vertical integration. Beyond potential ownership of the data created all along the proprietary chain, vertical integration offers the standard array of value-added efficiencies, as mass timber already generates an average schedule savings of 10%–25%.

For this reason, Ryan Smith, director of Washington State University’s School of Design and Construction, is seeing material suppliers moving into fabrication and manufacturing while general contractors are moving up and down the supply chain.

For manufacturers, the question becomes: “We are already manufacturing materials. Why don’t we fabricate them, and why don’t we build with them?” Smith says. “Designers are working for developers, contractors, or the prefabrication company. By controlling design and even site assembly, the mass-timber fabricator has more control of the entire process of delivery. So I generally see a consolidation of companies that will happen, especially with COVID-19.”

“What’s going on right now in our space—not just in timber but in industrialized construction—you’re seeing a pressure in the industry,” says Autodesk Head of Industrialized Construction Strategy and Evangelism Amy Marks.

This article has been updated. It originally published in April 2016.