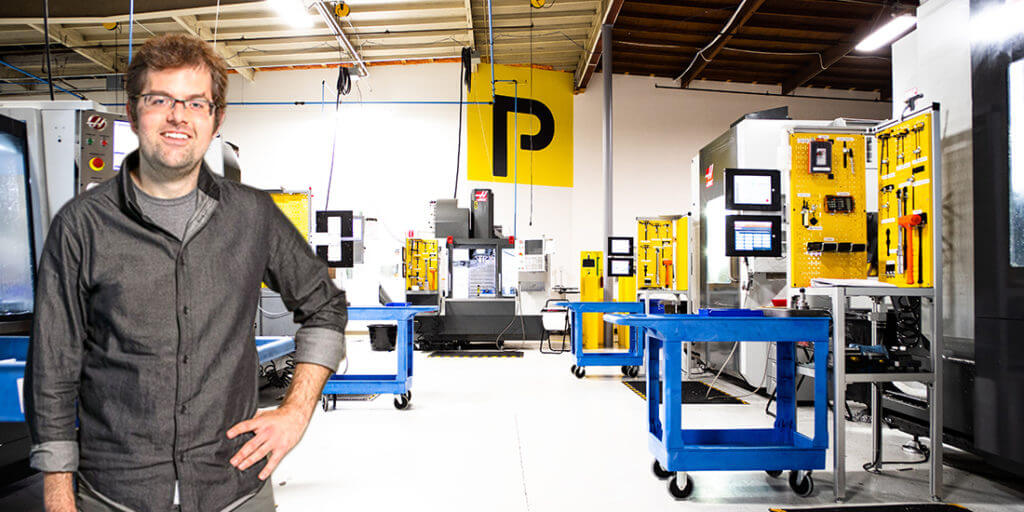 You may not think of Domino’s as one of the largest microfactory chains in the world, but Nick Pinkston would beg to differ. The cofounder and CEO of San Francisco’s on-demand CNC-machining company Plethora sees no difference between custom-manufactured pizza and custom-milled prototypes and end-production parts. And someday soon, he’d like you to order and receive them as easily—and almost as fast—as a thin crust with extra cheese.

Fascinated with invention since age 5, Pinkston’s interest evolved into tackling core manufacturing challenges. He started the HackPittsburgh community workshop in 2008, the same year he founded CloudFab to connect designers and engineers with manufacturers. Frustrated with the inefficiencies of manufacturing, Pinkston sold CloudFab and created Plethora with Jeremy Herrman to bring the agility of software development to hardware production.

Now six years in, Plethora aims to give literally anyone in the world with an idea the ability to produce needed hardware without barriers. Plethora helps streamline product development by producing on-demand parts from uploaded customer plans.

“Engineers constantly do new iterations on prototypes, so they want to get the first version tested, see what’s wrong, redesign it, make some tweaks,” Pinkston says. “That whole process is the rate at which you can innovate. So if we could really reduce that time, you’d get better products, and you’d get them to market faster.”

Plethora’s proprietary software analyzes users’ design files, provides instant pricing, and converts the files into instructions for its factory to produce. Currently, Plethora offers CNC milling and turning, but Pinkston plans to provide much more in the way of advanced manufacturing services. To do that, he’ll need a nimble factory setup that can expand, contract, and reassemble as needed—in short, a configurable microfactory. Here, Pinkston outlines his vision of this configurable future and the steps Plethora is taking to make it a reality.

So far, Plethora has been able to automate the parts of the engineering process needed to make a product. The company uses Autodesk Inventor to examine 3D models of parts and then programs its machines with Autodesk HSMWorks to make internal parts that will produce all the customer’s ordered parts.

This process represents flexible manufacturing—an established method of producing goods that’s readily adaptable to changes to the product. With it, Plethora has helped inventors make anything from small bottle stoppers to flying cars and machines that assemble aircraft components.

“We don’t make the consumer product,” Pinkston says. “We make the stuff that makes that product. We maintain the 3D geometry of every tool we use, all the machines we use, in a very rigorous fashion. We have all the 3D models, all the specifications. We know how the controllers work—everything. We’re probably the most characterized of any shop in existence, so we know very well what we can do.”

With flexible manufacturing, a new part needed to produce a new product or variation could require days or months to program it into a machine. As it expands, Plethora is applying adaptive manufacturing, using hardware and software built to be rapidly configurable. The programming can be done automatically and turn over a part within 10 minutes.

In one instance, Pinkston received a text that a race-car owner attending a local trade show had a broken part he wanted Plethora to reproduce. In two hours, the microfactory went from a design to a part that it couriered to the show.

“We are for the first time able to outpace the designer in our ability to make parts,” Pinkston says, “which means now the designer becomes the weakest link, because it might take weeks to months to design something. But we can make that thing for you in a few days.”

Pinkston envisions Plethora becoming so flexible and broad—like a factory comprising many shops together—that anyone could submit designs and get entire products through Plethora, not just parts. In other words, you would no longer need to have a deep relationship with a manufacturer or go abroad to make most everyday things.

For Plethora to be that flexible and adaptable, all its pieces need to move together, which is why it connects its own job-specific hardware to its own software, which can be modified as needed.

“We have to be able to break the machine down and retool it very quickly,” Pinkston says. “So we bought and designed our own hardware that makes that possible. We have a very modular thing where all the machines are clones. If a machine is a 3-axis milling machine, it is the same one everywhere, and the tooling is the same.”

In addition, everything goes through a simulation system first to confirm whether something is possible before it hits a machine. Once cleared, a machinist can simply press a button and walk away.

Plethora also designed its software to do the highest level of “thinking” that a machinist does, which it calls strategy generation. For example, each workstation is programmed to devise a progression, such as: “First I have to select this block of metal. Then I have to cut it to the approximate size. Then I have to load this thing and load it exactly this way.”

“There are a lot of in-process checks to confirm these things happened so that we don’t make any mistakes,” Pinkston says. “Because it’s easy to make mistakes when you’re going fast. And that reconfigurability has a very high risk of crashing.”

Although automation can seem like a threat to those working in the manufacturing business, Pinkston attributes a big part of Plethora’s full-stack approach to its software being made up of incremental learnings that are dependent on people.

Every machine has an iPad that records every error ever made, which goes back to the company’s industrial and software engineers to implement changes.

“I would say that we use the human-computer approach like a hybrid,” Pinkston says. “We have found that automation is great, but it’s brittle. Sometimes, it’ll do 99 percent of the job, but that last 1 percent requires a human and sometimes a lot more. I feel a very strong solidarity with Tesla because they also took a lot longer to automate their stuff. You actually have to learn all those lessons of the manual [process] as you make the manual workflow better, in addition to doing this very fancy automation stuff. We’ve had to cross all those bridges. You can’t just fly over them.”