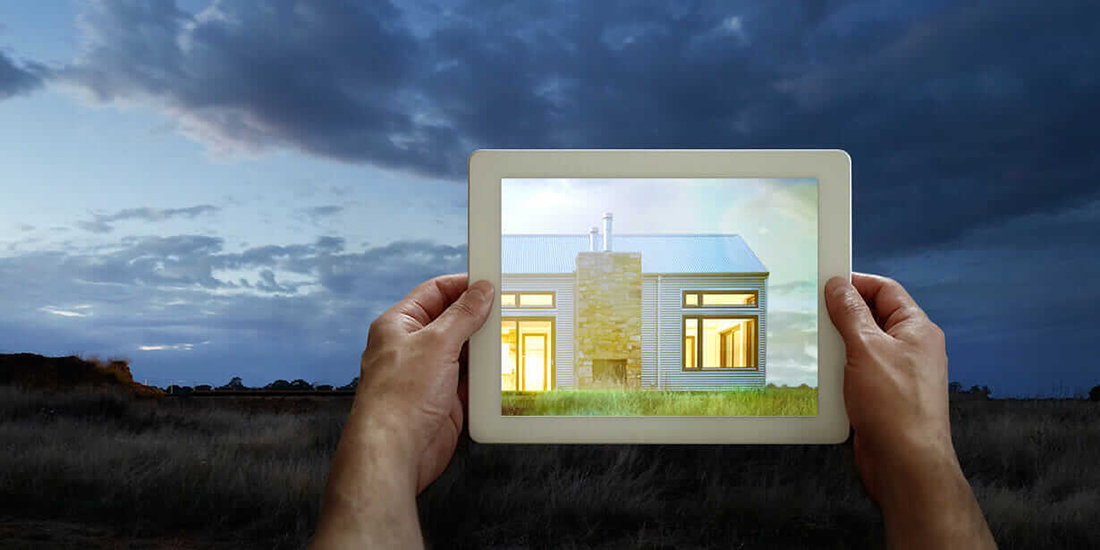 Arrayed against all other arts and sciences, architecture has been revered as the most immersive and enveloping creative discipline, one that results in habitable spaces that engage all of your senses. This literal act of world building starts out clumsy and small: drawings, sketches, static renderings, and bits of fly-through video. The technology is often developed by professional world builders at video-game companies, but it has been adopted by designers and builders, who use augmented reality (AR) to envelop clients, team members, and trades in a shared architecture vision like never before.

What Is Augmented Reality in Architecture?

AR is an interactive experience that enhances and overlays a user’s physical world with a computer-generated input. In architecture, AR is the overlay of 3D digital building or building component models embedded with data onto real-world sites. These models allow designers and builders to explore structural systems, mechanical systems, formal variables, finishes, furniture, and more, often derived from BIM (Building Information Modeling) data. Connected to all relevant trades, contractors, and subcontractors on the work site, AR offers untold potential to experiment with design in an immersive environment and to troubleshoot clashes and errors before they’re committed to brick and mortar.

For hardware, AR uses either dedicated glasses—like Microsoft’s HoloLens or MagicLeap that fill your field of vision with the hybrid digital environment—or a tablet or smartphone displaying the hybrid environment on its screen. Using HoloLens 2, construction workers can identify risks early on and validate designs and install conditions from early-stage design through to construction. Reality capture is a vital element of AR, and the Holobuilder photogrammetry platform can build photo models of work sites and integrate 3D models from Autodesk Revit or elsewhere.

AR is just one member of a growing family of extended reality (XR) visualization models. AR provides users with an additional layer of insights and data, placing computer-modeled elements in real-life environments, with a limited amount of interaction between the user, physical reality, and the digital model. On the other end of the spectrum, virtual reality (VR) produces wholly synthetic, completely immersive digital environments with headsets and hand controllers. Mixed reality (MR) lies between the two and generally consists of AR environments that offer more interaction between simulated and real-world elements.

Previously, AR was confined mostly to deep-pocketed architecture, engineering, and construction (AEC) firms that could spend hours integrating Revit models with homemade 3D-game-engine models. The technology has been democratized and is available on a per-project basis, which means that small firms and even sole proprietors can now take advantage of it to provide and present data in real time. AR is useful across nearly all parts of the design and construction process, through conceptualization, construction, and ongoing operations and maintenance.

6 Ways AR Is Used in Architecture, Engineering, and Construction

For architects and designers, AR offers much of its value in the early stages of design as a tool to experiment with form and attract client and stakeholder buy-in. It helps non-designers understand how any architectural composition will work: the proportion of spaces, its orientation on a site, the views it affords, the mix of material finishes. AR is excellent for this use, as it allows anyone to “walk the site” long before groundbreaking.

Many apps allow this sort of design visualization, including ARKi, created by architect Sahar Fikouhi. ARKi integrates tabletop models and full-scale 3D models into real-life environments, compatible with Revit and other programs. The app is one of the most robust AR design tools available, delivering dynamic animation of 3D models anchored to real space. Users can stretch or shrink buildings, pivot them around a point, and take them apart layer by layer in an exploded axonometric view. There’s a robust set of material textures on file and built-in shadow and light analysis functionality. It’s also more public-facing than many apps, so you can share models on social media or via email.

All of these visualization modes rely on digital twins of the proposed product or building. A digital twin is a virtual 3D model that contains smart, dynamic data on its own formal dimensions, material characteristics, mechanical functions, and relationship to other elements, as opposed to a purely graphic representation of the object or building. As AR matures, the more data each model can contain, the more accurately it can simulate its real-world corollary—and the more useful the model becomes.

The COVID-19 pandemic has made everyone an expert in remote, real-time collaboration; AR is yet another technology pushing this frontier. One example is Virtualist, a virtual online workspace for AR and VR collaboration. Virtualist enables real-time collaboration and remote assistance with staff and team members, bringing everyone into a hybrid AR environment. If a job supervisor is on-site, walking below a heat duct, she can bring in a teammate virtually (viewable with a tablet or smartphone) and see a 3D model of the electrical duct that will run parallel to it in the next phase of construction. Meanwhile, the virtual teammate’s avatar (and the on-site supervisor) can mark up and annotate models and built elements as needed.

This type of quasi-virtual meeting space can be useful across all phases of design and construction, but several AR platforms specialize in aiding collaboration during the construction process. One example is Fologram, which allows users to create interactive models that guide step-by-step construction in real-world environments. A step toward mixed reality, Fologram can also use QR codes or arUco markers on small pieces of paper to manipulate models in space. For example, with wireframe models, these guides specify how to trace out the dimensions for molds to create building elements and where to place each brick in a wall with millimeter accuracy.

For the 2019 Tallinn Architecture Biennale, the Fologram team joined with Soomeen Hahm Design, Igor Pantic, and Format Engineers to craft the Steampunk Pavilion, made from steam-bent strips of timber knotted and spiraled like lengths of silk ribbon. The team used Fologram to shape each sculpted and bent bit of timber and to guide creation of the form-work necessary to bend each piece into shape.

Given its ability to peel back layers and discern what’s hidden, AR technology is ideal for underground construction projects. Instead of sorting through reams of blueprints hidden away in a government office basement, AR allows builders to create dynamic and accurate models of what’s underground, seeing how perilous it might be to bring an excavator around. <!–Augview is one AR platform that specializes in underground construction, pulling GIS data to give users comprehensive depth and utility type information. Working with mobile devices, teams in the field can flag what they find underground and continually refine the model. AVUS (Augmented Visualization of Underground Services), which uses smartphones to map, view in augmented reality and implant buried networks, is another solution.–>

AR offers opportunities to give new employees direct instructions on how to complete potentially dangerous jobs, decreasing the need for direct supervision. Whether through bullet-pointed direct text guidance or simply having continual access to a reference model, builders and designers will have a sharper idea of what they’re building toward. Entire workplace training modules could be integrated into AR platforms, helping workers learn as they work with less chance of serious mistakes or injuries in the field.

Construction inspection is one of the most obvious uses for AR in the AEC sector. With AR, builders can instantly compare what’s been built with the BIM model, snapping photos, adding and revising virtual notes that stick to specific built or designed elements. GAMMA AR is one example. With it, users can isolate or hide elements of a model and annotate it with text, images, or voice notes. Available for Android or iPhone, it retains some of its functionality offline. Similarly, VisualLive allows users to change the opacity of 3D models to see through to other elements. To import models, it has users print QR codes, to be hung on any flat or vertical surface, which are then scanned to upload and align models.

The need to keep a close eye on a building doesn’t stop after its grand opening; AR inspection by operations and maintenance staff can help prolong a building’s life. Having an updatable digital model to follow through the years can give staff a superb picture of how the building operated when it was brand new and how it’s changed over the years.

How AR Can Work on the Jobsite

AR lets designers and builders view their compositions as discrete layers of data and real-world construction: structure, massing, MEP, HVAC, security systems, information technology, et cetera. It’s only mild hyperbole to call it a kind of X-ray vision to see through walls. By flying different models in and out, you can untangle structure from mechanical systems, detecting problems before physical building begins.

But it’s more than that. If a problem is detected and no one on-site can fix it, you can bring experts into a hybrid AR environment and their digital avatars can float by and mark up fixes. On some AR platforms, you can even do design fixes in the app, which can be uploaded into a dynamically changing BIM model. This makes all of these changes easier to communicate to non-trade stakeholders, like clients, in a visually rich and clearly demarcated digital environment.

The Benefits of AR in AEC

Fundamentally, AR is a communication tool. Its hybrid immersive environments make architectural space legible and easier to understand—and does the same for individual building components that make up the space. This ease of communication benefits staff that might be learning a new construction method or client investors who need to be won over to a new design concept. Rather than being atomized at their desks and on a jobsite, AR allows a team to collectively experience BIM data interwoven with built space.

And within these communication efficiencies lie time and money savings. Rapid tinkering with designs before they’re set in pixels (or steel) saves time and money. Builders and contractors can leverage 3D environments to better sequence construction processes. An interactive model can pinpoint how long each granular step will take, including tasks such as excavation, pouring concrete, assembling prefab HVAC units, brickwork, and roof laying. Less time spent coordinating actions saves on the bottom line, and more time efficiency and material accuracy translates into more sustainable buildings.

The AEC industry is making progress with AR tools in construction, especially in conducting inspections and spotting building errors, which helps designers make early-stage revisions. But some limitations persist. For example, most AR functionality is dependent on high-speed wireless Internet, which is not always a given on construction sites. Also, technical proficiency with hardware brings higher levels of immersion. The more AR platforms rely on interaction with digital models (tipping closer to MR), the more they require specialized glasses like HoloLens or MagicLeap. This kind of hardware requires more training to use than a simple smartphone and is harder to use outdoors or in bright environments. Yet while tablets and smartphones are less expensive and have lower barriers to use, they’re just not as immersive.

But even through the screen of an iPhone, AR in AEC means more information and data are available to more people, much faster. Thanks to better documentation and digital information along with the power of real-time collaboration, it’s never been easier to see what’s being built and where it’s being built. It’s something like a look into the future, yet it’s already underway.

This article has been updated. It was originally published in March 2014.