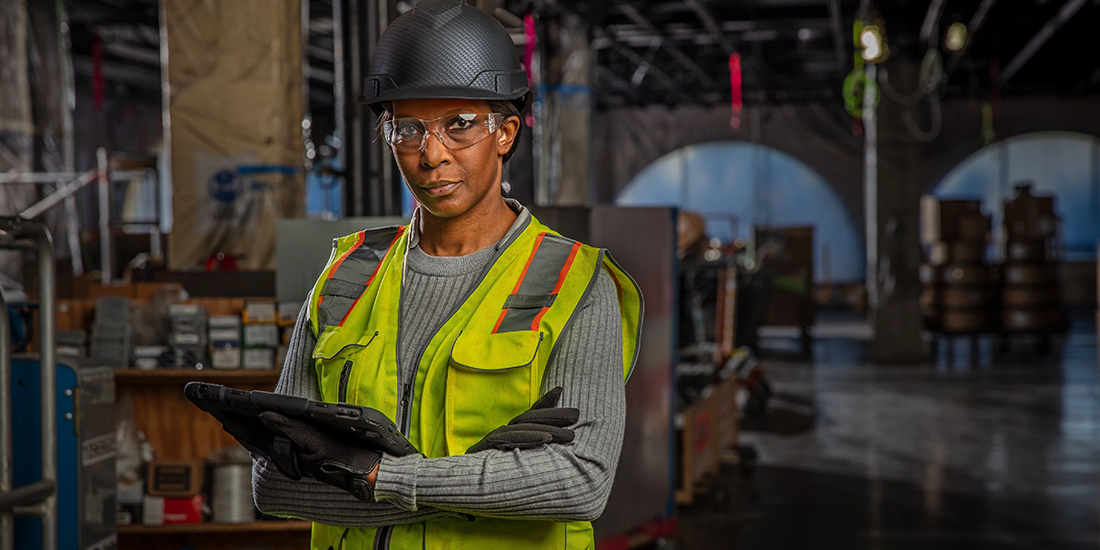 The history of construction dates back to the Stone Age—a period when actual stones served as hammers. As time went on, blacksmithing surfaced; metal nails appeared; and 2 million years later, the hammer handle emerged. These monumental strides in building led to forging; ironwork; and, ultimately, the Industrial Revolution, when construction, as it’s known today, was born.

The industry still evokes images of sweaty men in hard hats, but the notion that it is—and will always be—a boys’ club is fading fast. A significant gender disparity in the building trade still persists, but today’s work culture is growing more inclusive. And in 2021, women, trans, nonbinary, and gender-nonconforming people in the construction industry are the next frontier in the industry’s evolution.

While much is being done to draw more women into construction, an age-old narrative still exists: A career in construction is perceived as a “man’s job.” Paradoxically, this lack of gender diversity is also one of the industry’s weaknesses. This is because women, many of whom are able-bodied and viable candidates for a broad range of construction positions, often won’t consider the field based on this stereotype alone.

Moreover, with women making up just 10.3% of the workforce, some people just aren’t used to having women in the industry. This culture frequently leads to women and nonbinary individuals experiencing gender discrimination in the workplace from their male counterparts. As a result, women working in construction commonly report feeling disrespected. In fact, lack of respect is the most cited challenge by far according to a 2021 LevelSet survey.

Other challenges in the construction workforce range from sexual harassment from coworkers and clients to port-a-potty hygiene, among other issues. Basic ergonomics for women can be a problem, as well. Tools are often too large for women, who on average have smaller hands and are proportionally different from men. Although these might seem like straightforward challenges that can be overcome with adequate systems in place, the industry simply hasn’t adapted yet.

Racial Issues in the Workplace

Racial issues in construction aren’t substantially different than the issues women of color encounter in other industries. But they’re compounded by the fact that these groups already face an additional challenge—they’re women and nonbinary individuals working in a male-dominated industry.

Young women of color may be particularly susceptible to racial biases, as they’re commonly viewed as less experienced. Once again, this issue can become a compounded problem of racism coupled with ageism and sexism. Women of color constitute 45% of the women in the construction trade, which makes it even more urgent to confront racial issues for the industry to flourish in an increasingly progressive world.

COVID-19’s Impact on the Construction Sector

From an economic standpoint, 2020 and 2021 haven’t exactly been normal years. COVID-19 has affected every industry in some way, and construction is particularly sensitive to economic cycles. Supply chains were radically disrupted due to a shortage in materials and equipment in 2020, and multiple lockdowns worldwide halted countless projects.

Meanwhile, industries dominated by women, such as education and health services, experienced the most decline due to the pandemic; women have lost a net of 5.4 million jobs during the pandemic-induced recession, compared with 4.4 million lost by men.

Because the construction industry is faced with an aging workforce and a shortage of skilled labor, it is in a position to offset some of those job losses as it works toward closing the gender gap. Expanding recruitment efforts to include women, trans, and gender-nonconforming people exponentially expands the pool of potential employees.

Real change might not be felt overnight, but construction’s recovery measures beyond COVID-19 are likely to have a profound effect on the transformation of the sector.

The Construction Industry in 2021

There’s good news for women entering the construction trades today: A swiftly growing job market means a lot more jobs are cropping up. It’s also a prime opportunity for the industry as a whole to up its game and start targeting the population it has been largely ignoring.

According to SmartAsset’s second annual study on the Fastest Growing Jobs for Women in America, there are 50,000 more women in construction now than there were in 2015. Perhaps an even stronger indicator that things are evolving is that the number of female construction managers has grown more than 101% in that time. So despite the existing gender gap, women are making real progress in construction management and as executives in the industry.

When it comes to pay across the US civilian labor force, the numbers are pretty straightforward: Men earn more than women. Overall, women earn approximately 19% less than men in the United States. In construction, on the other hand, the national gender pay gap is among the lowest in the nation, with women earning an average of 95% of what men make—a fact worth celebrating.

Although labor statistics don’t track a range of gender identities, the median pay for women working in construction is roughly 7% higher than it is across all other industries. The opposite is true for men, who typically earn less in construction than they do in other industries. Despite the trade being largely male-dominated, a deep dive into the numbers beyond surface-level statistics reveals an inclusive, forward-thinking industry starting to take shape.

Eliminating the Gender Gap in Construction

Gender identity is evolving in the US, and Generation Z leads the change in awareness. According to Pew Research, 35% of Gen Zers say they personally know someone who prefers to go by gender-neutral pronouns, compared with 25% of millennials, 16% of Gen Xers, and 12% of baby boomers.

Construction firms can do their part in the recruitment process to project a more inclusive image by employing the following strategies:

As the conversation around inclusivity in the construction industry heats up, nonprofits advocating for nonbinary and LGBTQ+ individuals are paving the way. Dykes With Drills hosts workshops, community builds, and more to empower women, transgender, and gender-nonconforming people to learn construction skills firsthand in an inclusive environment in both Chicago and the Bay Area. Volunteers with the nonprofit recently constructed part of an indoor skate park in Oakland and tiny houses for homeless youth. In New York, Build Out Alliance provides networking and mentorship opportunities for LGBTQ+ individuals in the construction industry.

Then, there are companies such as Laing O’Rourke that aim to employ women and men in equal numbers by 2033. Autodesk and the Associated General Contractors of America (AGC) also recently launched the Construction Diversity Image Library to increase the representation of industry diversity in the media.

Committed to Diversity in Construction

One way to stimulate the economy and create real change is to redefine the narrative of what it means to be a woman in construction. This is no easy undertaking given construction’s reputation as a male-dominated industry, but many organizations today are committed to the initiative. Miron Construction is one of them.

Not long ago, Miron launched an annual outreach event to help bridge the gender gap. The event, called Build Like a Girl, was created to show middle- and high-school girls that construction is not just for boys. Build Like a Girl encourages young women to roll up their sleeves and experience what construction and the trades are all about, through hands-on projects at temporary jobsites.

Victoria, Australia, is also advocating phasing out gender inequality in construction. The government has funded the development of Building Gender Equality: Victoria’s Women in Construction Strategy 2019–2022. The ultimate target is equal numbers of men and women within the industry.

Breaking Down Stereotypes in Construction

The face of construction is changing fast, but diversity strategies and greater visibility of opportunities are still needed to encourage more women, nonbinary, and gender-nonconforming people to enter careers in construction. In this past decade alone, women have broken ground in the industry—for example, influential architect Elizabeth Diller landed a spot on Time’s 100 Most Influential list in 2018.

Construction today is so much more than just nuts, bolts, hammers, and scaffolding, and there are more inspirational gender-diverse people in the field than ever before. It’s an industry of vast potential, and it’s rapidly evolving through technology and innovation. By highlighting the industry’s diverse opportunities, women and nonbinary individuals are discovering that they, too, can be a part of an innovative, rewarding field.

This article has been updated. It was originally published in January 2018.